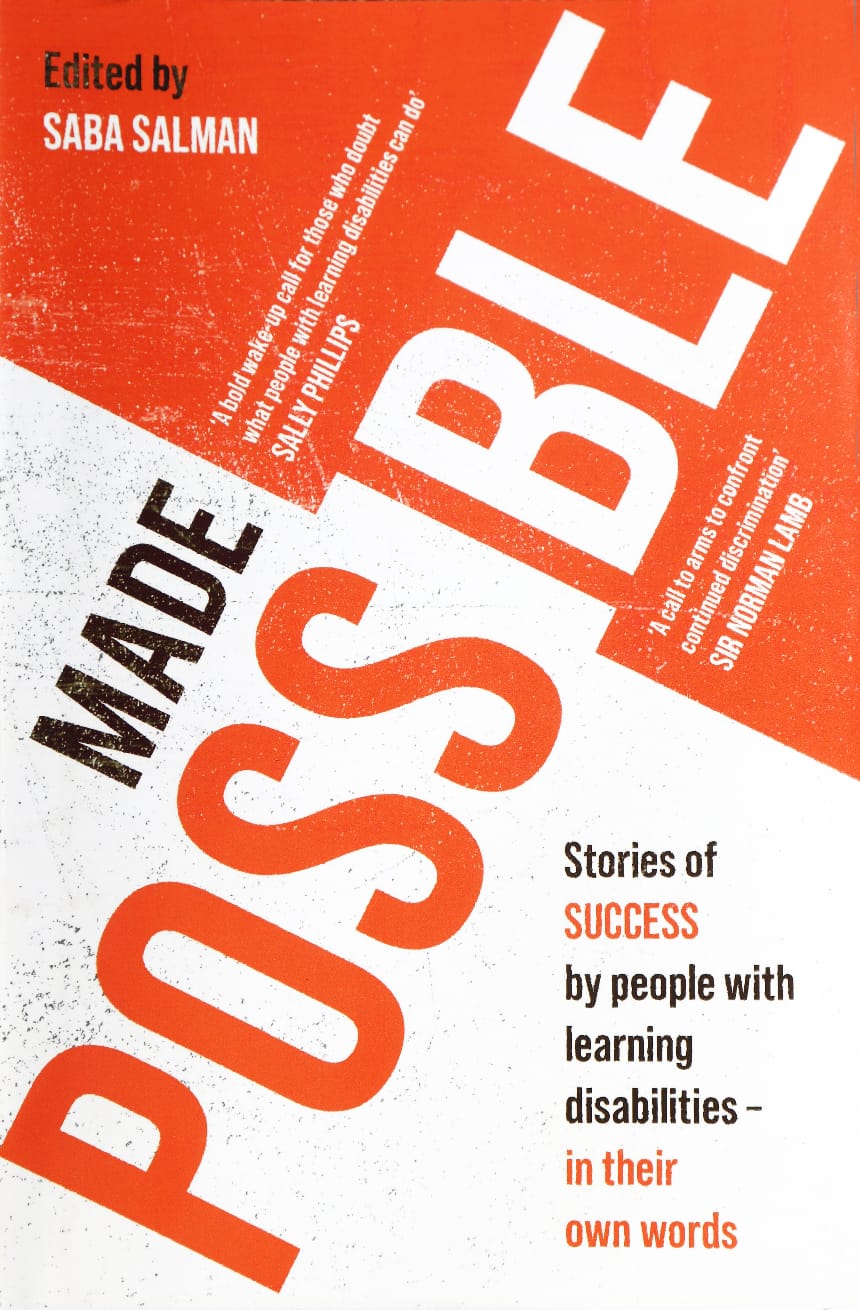 Stories of success by people with learning disabilities – in their own words. Edited by Saba Salman.

As the strapline tells us, success is the inspiration for the essays. How they found it, what it means to them, and what influence their success has on society. There are nine in total, the first by the editor, Saba Salman and eight more by trailblazing adults from different competitive fields.

Each has a learning disability; all have found professional and personal successes. All the contributors cite times their self-belief and confidence grew and times they have inspired others both directly and indirectly. Whether this was by discovering the thing they loved to do or getting the right support to do what they have passion for, they show that being confident and independent made the difference between success and unfulfilled potential. These similarities make the anthology cohesive, but the variety of voices and experiences (age, gender, race, and sexuality) makes this book an important glimpse and undeniably enriching to all who read it.

Saba Salman’s inspiration for this project came from her youngest sister, Raana. ‘Untold Success’ by Salman herself, brought me to tears with intimate stories about the early difficulties of city visits and a joy filled turning point at Christmas.

‘Father Shaun’ opens with Shaun standing on his estranged father’s doorstep ready to show his MBE and how far behind he’s left his cruel name calling. It is not a revenge story but a stellar example of the invaluable work and life experiences that can have such a huge impact on confidence and success.

‘Champagne, Snakes and Stealing Chips’ shifted my focus on peripheral characters on TV. Why don’t you see extras who have learning disabilities, like Downs Syndrome, just doing a job? Why are they always cast to play a sad/uplifting role about their disability? Sarah talks about her acting process and how she needs to prove her worth every time she meets a new director or production team. Often becoming a ‘safe pair of hands’ on stage.

‘Black Cats and Chemistry Sets’ talks about shaken confidence, dampened dreams. Then Gary met the right person at the right time, moving forward to help and speak up for himself and the people around him. Like a lot of the other essayists, Gary’s momentum and ambition outstrips all shoddy expectations ever cast at him by adults in authority.

‘Loud and Proud’ is my favourite essay. Lizzie’s singing is recognised as a gift early on and her family do all they can to fan the flames. Her father’s temperament is a lesson treasured against any bullying or cruel name calling. Lizzie goes on to experience much success, including singing with Beverley Knight at London 2012 Olympic opening ceremony.

Dan Pepper is a former Paralympian swimmer, ‘If In Doubt, Balls Out’ is a family saying he carries with him through all his endeavours. Success is constantly met with ‘what next?’ Dan’s successes are made from hard work and dedication but not all his Paralympic dreams can come true.

‘Laura’s World’ is a place of colour, shape, and the spaces between. Laura uses drawing and painting to bridge the gap between how she perceives the world and how she can express it to others.

‘Sparkle and Space’ is Matthew Hellett’s essay detailing his experiences of Brighton, filming, discovering Mrs Sparkle, and the importance of shared experience and finding a way to connect.

‘Fights, Rights and Insights’ is the journey from an eight-year-old’s political speech about the importance of the NHS to the grown man who became the first person with a learning disability to be employed by NHS England – with many political highlights along the way.

All the stories have elements that are funny, touching, honest, and sometimes sweary. There is pain, hope, despair, and passion. The book opens with a large section of ‘Praise for Made Possible’. I skipped these and left them until the end. Reading this book, I learned success is made possible by the kind of support which leads to confidence and independence. Which is needed to discover likes and talents to build success as well as making day to day necessities and errands easier. By the end of the essays, I felt as though I knew better than I did before but with still so much more to know.

Published by Unbound and available now at good bookshops.