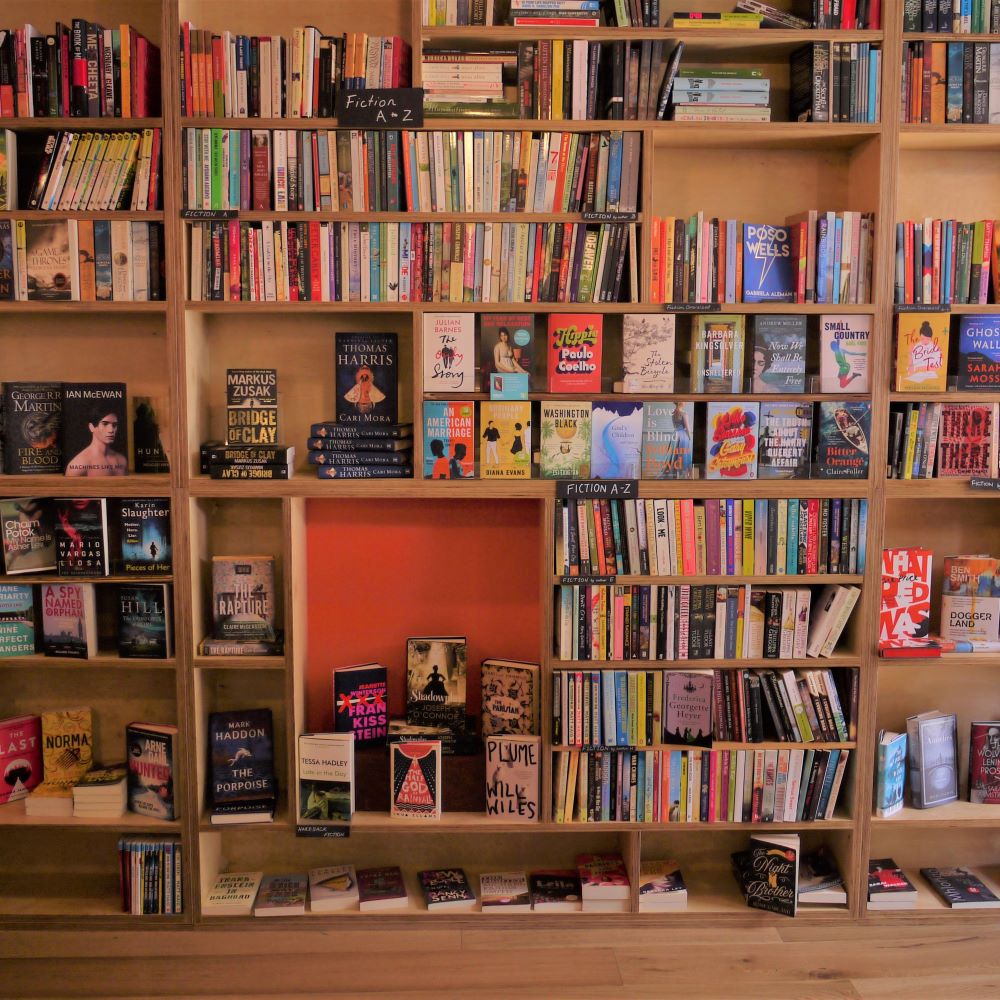 For the staff and volunteers at October Books, there is delicious irony in the fact that the building in which the radical bookshop is now based used to house a bank. 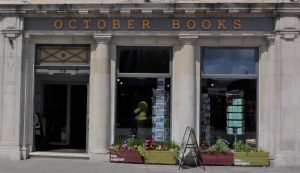 “I love it, it’s so ironic,” exclaims volunteer Glyn Oliver, who has been helping with fixing up the new venue, around 20 doors down Portswood high street from the shop’s previous home.

“People here are doing something for the community. Now there is a vault of books, not cash, full of how too beat them at their own game.”

The building was bought late last year, with a huge amount of public support, freeing the workers and customer members cooperative from rising rents from a private landlord. The bookshop, which has been at two previous locations in Southampton since 1977, was moved to its current, permanent home in November. The relocation to the former Nat West building hit national and international headlines thanks to the human chain that was made along the high street in the Southampton suburb to move the books and other goods to their new home.

Jess Haynes, who joined as a waged staff member of the cooperative three years ago, having previously volunteered, is delighted that October Books has been able to shed the shackles of paying rent to a private landlord.

“The majority of our profit was going on rent, and we couldn’t afford it,” she says.

“Our landlords were millionaires and were a multinational business, so our profits were going out of the local community. It feels much more ethical now we are in a building that we own. This is something I feel very passionate about,” she adds, warming to her theme.

“You hear about the high street dying and it’s blamed on the internet and rates. But I’d say that a lot of it is caused by landlords charging huge rents, and even then, the people who run the shops are having to pay all the maintenance costs. At least with business rates, that money is going into the local community, but if you’re paying to a landlord who isn’t local, then it’s just going out of the area. Commercial landlords are killing the high street.”

The cooperative which runs October Books made the decision to to hand their notice in on their old premises in November 2017, having been told that their rent would increase the following May.

“We took a punt, and handed in our notice, without knowing where we would move to,” says co-op staff member Clare Diaper.“This (the bank building) was on the market, and we had a look.”

Jess adds: “I laughed and said it would be nice if we had enough money for it, and Clare said ‘let’s go for it’.”

“I worked out that it would be the equivalent of 15 years rent to pay off the capital, and the future of October Books would be secured,” says Clare.

The cooperative raised £487,800 to buy the bank, including a bank loan, donations and, the majority, repayable loan stock, purchased by supporters. The leasehold on the first floor has been sold to local homeless charity the Society of St James, and converted into supported move-on accommodation for people moving out of hostels.

But why do people feel so passionately about October Books that they are willing to give up their time to volunteer there, reach into their own pockets to support it, or choose to work there, as a co-op staff member, rather than in a quite possibly better paid and less responsible retail position elsewhere? 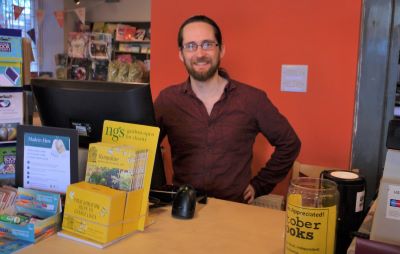 “We don’t just have the nation’s most popular 500 books on our shelves. We curate what we stock. And as a workplace, it would be better if there were more cooperatives, where workers have control. If you’re working or shopping in a conventional shop, it’s the system that profits – the millionaire owners and hedge funds. It can seem more difficult to set a cooperative up – it’s not something you’re taught in GCSE business – but if you look at business longevity, co-ops do really well and are as or more productive than other models. In conventional businesses, there can be lots of waste at managerial levels, with people doing ‘busy work’ to look busy and justify their role. In a co-op, you’re all on the same page, and can implement any changes that need to be made far more quickly.”

Glyn (pictured below), a retired teacher, is involved in a number of community action groups, and began volunteering for October Books when he took part in the human chain. 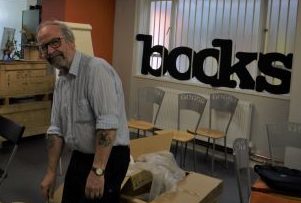 “This is a community project, which is so important,” he says. For him, the type of books that are stocked, alongside fair trade products and food, is also a key aspect of the shop’s importance.

“I want to see people really finding out about the world around them, or else they end up in ignorance and fall for people like Donald Trump.

“I used to be an electrician. Then I educated myself, did a degree and became a teacher. There is such a need for people to find out about the world. This is a radical bookshop and we want an independent, radical bookshop for the community.”

The community has also been there for October Books, most notably when around 250 people turned out in October last year to pass more than 2,000 from hand to hand down the street from the old shop to the new one.

“It was a tremendous show of support and community and we were moved and incredibly touched by it,” says Clare. “It was amazing. We are of and for our community, and it was truly heartening to see that reciprocated.”

Since the move, sales have been up 20 percent, which the team put down to a combination of being in a nicer building, which is more visible, and the publicity that their fundraising and the human chain resulted in. 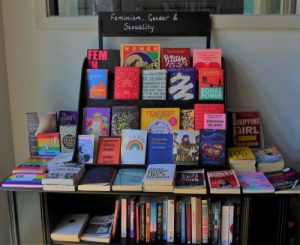 The role of the shop in the local community has changed in the 40 plus years since the cooperative, taking its name from the Russian Revolution, was founded, and it is a credit to those who were previously involved in the co-op, as well as those who run it today, that it continues to thrive.

“The old shop (on Onslow Road) used to be the only place in the area where you could go to buy lots of things, such as LGBT+ fiction and magazines,” says Jess.

“My aunt used to go there to buy her Glastonbury tickets! It was also somewhere that people would go just to find out about what was going on in their local community, before the internet.”

And, despite the power of the internet, allowing us to shop with a few clicks and zero human interaction, October Books continues to carve out a place for itself in the local community.  Or perhaps it is even because this small cooperative, which puts people over profits, where you can pop in just for a chat, where new ideas and diversity are sought out and encouraged, is so far from the anodyne retail experiences that have become the norm, thanks to retail giants and internet shopping, that more and more people are coming here for books and more.

And as well as the well-publicised move, October Books made another change in recent years, which draws it more closely to the community of which it is part. In 2017, it amended its rules, to allow customer members to participate in the governance and management of the co-operative, alongside workers. The aim of this was to ensure future plans, perspectives and the nature of the business reflect the aspirations of its diverse community.

“It almost feels like we’ve come full circle, back to the role of the old shop,” adds Clare, “now that we have a community space, where we can help to bring people together.”

For more information, visit www.octoberbooks.org, or pop in!