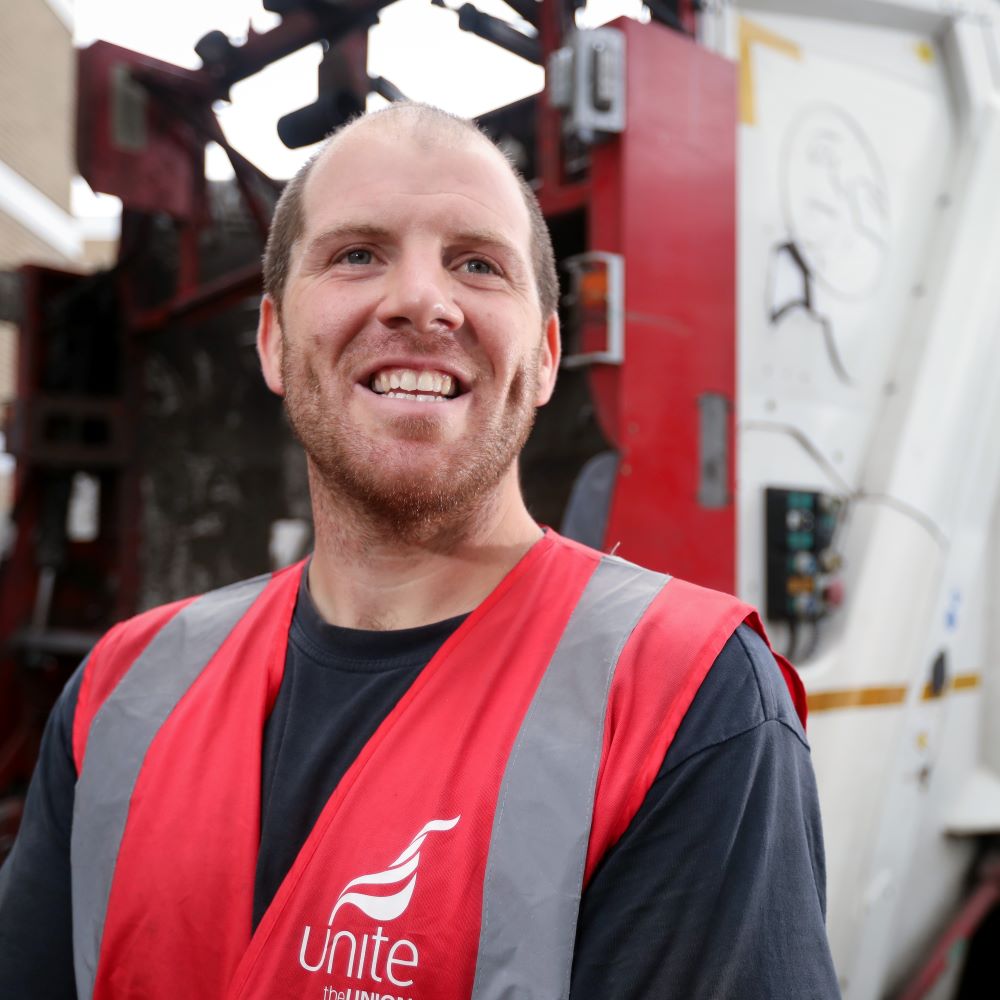 As a child, he spent much of his time hanging out at his grandad’s house in Shirley, Southampton, where The Sun newspaper was banned, and where Simon was schooled in the importance of being in a union. The older man instilled respect for working people into young Simon, for instance, giving him drinks to hand out to local binmen on their rounds.

Simon lost his grandfather, Richard, when he was 18, and he hopes that he is somewhere, watching his own union activism, which has included taking to the stage in front of thousands of delegates at last year’s Unite conference, to tell his story.

Today, Simon, who is a binman at Southampton City Council, is a Unite safety rep and branch political rep,as well as trade union liaison officer for Southampton and Romsey Labour Party. Along with addressing his union’s conference last year, he also spoke at the recent Southampton Transformed event. He has stood as a Labour Party council candidate in Romsey, where he lives, and has expressed his interest in being considered as the parliamentary candidate in his area.

When he tells the story of how he has got to where he is, he begins at Tanners Brook Infant School, where teachers recognised that he had quite severe dyslexia.He went on to Oaklodge School, for children with special needs, after his mum fought to get him a place.

“It was such a great thing my mum did for me,” says Simon. “The teachers and the head couldn’t do enough for the pupils. They gave me confidence and believed in me. If I hadn’t gone there, I wouldn’t be where I am today.”

Unfortunately, although the school helped Simon hugely academically, going to a different school to all his old classmates made him a target for bullies who hadn’t bothered him when they were in the same uniform. He was attacked while cycling to his grandfather’s house after school, and was beaten so badly that he was hospitalised. “I went inside myself for a while,” he says. “I wouldn’t go anywhere unless I was driven. It took a while for me to start cycling again, and then I took a different route. I didn’t want to let what had happened control my life.”

After college, Simon worked at Sainsburys, before going on to get a job as a binman, some 16 years ago. He joined the union almost immediately and was then approached by the learning reps, who realised that he had dyslexia and offered him support. Having struggled with education when he was younger, and lacking in self-belief, at first Simon was reluctant to sign up to more learning but with the support and encouragement of his learning reps, he went on to Skills for Life numeracy and literacy courses and won the SERTUC learner of the year in 2012. 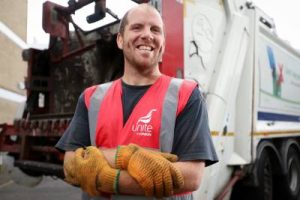 Simon grew in confidence and went on to stand as a union rep, a role he has had for more than a decade. “My members are some of the best I know,” he says. “I’m lucky enough to be able to do what I do because they vote for me to do it and to represent them at conferences and so on.”

Simon is passionate about socialism and the importance of trade unions to working people. “If you are a working person, and you want change, vote and join a trade union,” he says. “With the coalition government and the Tory government, there’s a big group of people who are missed out on in talks, in everything and that’s the people on the front lines, looking after everyone every day – the street cleaners, the binmen, the people who work for parks and open spaces, the people who work in adult social care – the local government workers. We see more and more dependency on these front line services, with less and less resources. I can’t see local government lasting under another Tory government. I expect a lot of privatisation.”

Simon is a firm supporter of Jeremy Corbyn, and is critical of what he sees as the right wing media’s attempts to attack him on a personal level. “So what if he doesn’t sing the national anthem? I don’t sing it. I’m not a royalist. So what if he wears a duffel coat at a remembrance parade? The man was cold. I wish people wouldn’t worry about such small things and instead would worry about the fact that we need baby banks, with basic items that parents can’t afford, zero hour contracts, homelessness, austerity. I wish people would grow up and look at the bigger picture. When people have a go at Jeremy Corbyn, they’re doing it because they don’t know how to argue against his policies,” he adds.

“I believe the Labour Party should be radical and that trade unions should be able to protect the workers. I feel that I do what’s right (as a union rep). If I can empower some people to go and do better, every day is a win. If I can help people be happier in their workplace, I’m smiling. If I can have a chat with someone in a bar and plant a new seed, I can make them think. I believe in what I do, because I want a fair society for everyone. I just want a decent society, where everyone grows together. I’d like to see the next Labour Government scrap the Trade Union Acts that were brought in under Thatcher and Cameron and raise the minimum wage. What do people do with a decent wage? They spend it in the local economy and it helps everyone. It’s more money in everyone’s pockets.”

Right now, Simon is focused on making more people aware of the importance of unions and encouraging everyone to join one. “I have to be thankful to trade unions for helping to open my eyes,” he says. “People who are critical of trade unions are people who don’t want change.”