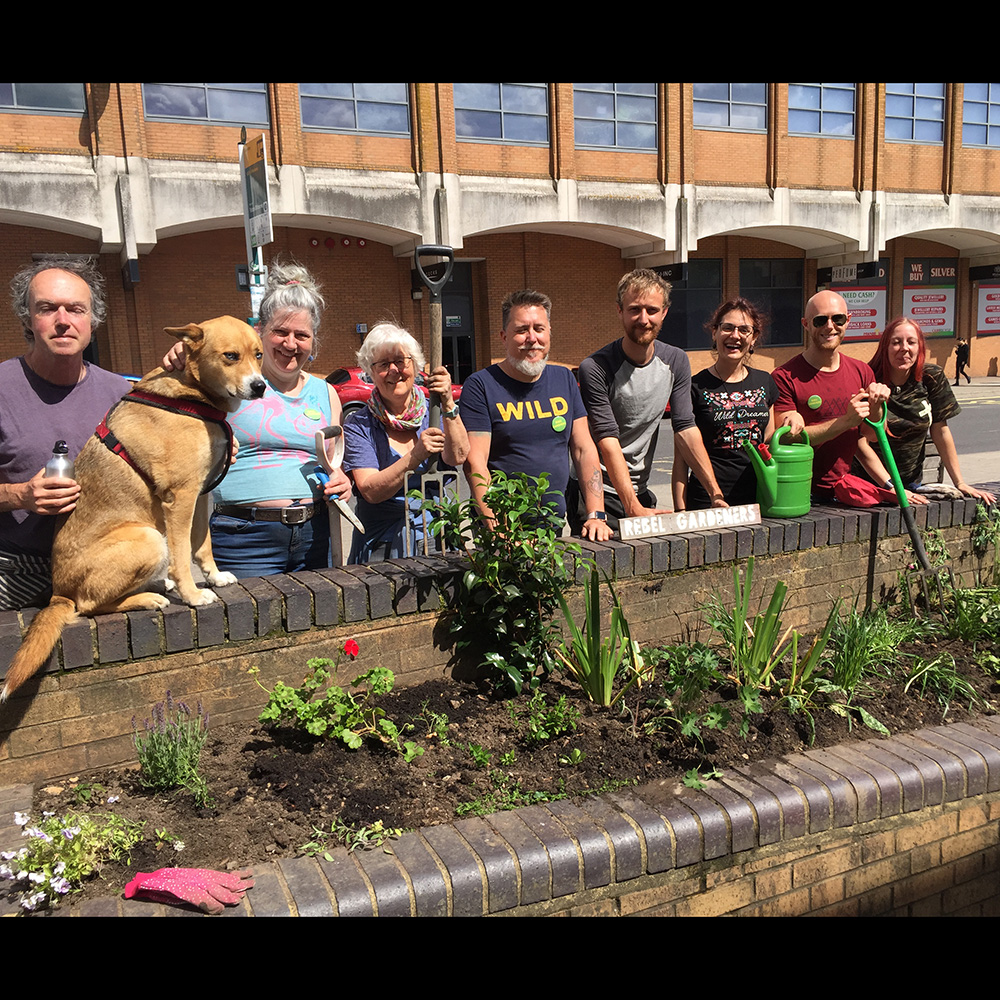 by Alex Thurley-Ratcliff (I’m the one in the ‘wild’ t-shirt).

So here’s the thing – I really don’t like concrete, tarmac and paving stones. Yes, yes, I know they’re useful and are probably the only way for a modern city to function – but seriously? Our cities are a monochrome of greyness; the sun comes out and it’s like the Nevada desert and the rest of the year you can’t see the line between the grey sky and grey buildings and grey streets…

If I had a superpower it’d be to re-green this built environment. And I’m not the only one. Southampton Rebel Gardeners formed this year (find us on Facebook), and like all grass roots organisations we’re only growing slowly. Because we’re not about the big money or big gestures, we haven’t got the money or the manpower; and we’re not into planting more sterile acres of green parkland, though that is better than concrete. We are about motivating and mobilising a few people here and there to make their corner, this corner, of the world a little more beautiful, healthy and restorative. 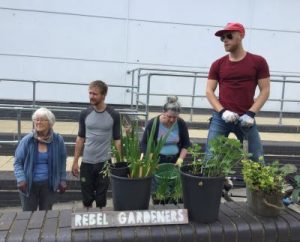 We believe that small, local, mass movement steps will add up to transform cities like Southampton. We want a new approach where we see citizens, councils and businesses working together to re-green our cities. In twos and threes, let’s take over the scrubby, unloved corners, unproductive plots, ugly roofs and barren pavements, adding beauty, colour, fragrance and food to the urban landscape. It doesn’t take a lot of power to change the world – it takes lots of interventions and local changes from lots of people who have very little power but who use it regularly and with commitment.

So what makes us Rebels? And why?

Well, we are technically guerrilla gardeners, and that started in 1973 in New York. Liz Christy and her Green Guerrilla group transformed a derelict private lot into a garden. Then in 2004, Richard Reynolds wrote the book “On Guerrilla Gardening” and set up guerillagardening.org.

But it goes deeper than that, and in a way that, I believe resonates with the British sensibility. In 1649, Gerrard Winstanley and the “Diggers” in Surrey attempted to farm on common land. That would seem a basic right… but power never likes a challenge and it didn’t end well! The Diggers envisioned a better ecological relationship between humans and nature, acknowledging that people and their surroundings are connected. “True freedom lies where a man receives his nourishment and preservation, and that is in the use of the earth,” said Winstanley. 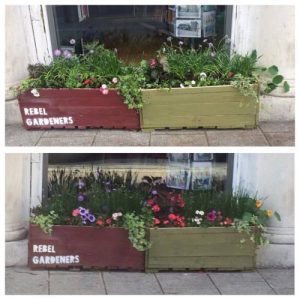 So we’re simply following suit – even though the “land” always belongs to someone (although I do question the validity of that statement). That means you can’t even walk on it, sit on it or enjoy it without their permission. You certainly shouldn’t plant things on it – how cheeky!

While that seems fair at one level, in a public sphere people should have the right to do certain things where the “owner” of that land isn’t able to, willing to or caring to. That’s where our “Rebel” bit comes in. We’re not about asking permission just because a council flowerbed is unkempt, or a corner of a roadside is just square metres of dirt collecting plastic rubbish like wind-blown toxic leaves, or a business isn’t interested in the grass verge outside their offices. As far as we are concerned that’s up for grabs and we’ll have it! Next thing you know we’ll be violently planting violets or seed-bombing your lawn with wildflowers and herbs. And, even if these areas get vandalised, ripped out or built over six months later, it’s a start.

On a more fundamental level, we are about respectfully re-building this urban world into a gardened ecological haven – where the environment and the people who live in, work in or travel through it can flourish. We have dreams of green walls on three-story buildings, green walkways through no-car zones, trees in shopping streets keeping it cooler and cleaner; we want to see flower planters and bus shelters with roofs of insect-attracting plants; schools where vegetables grow for snacks – and whatever your imagination can supply. We’ll try it all and see what takes root! 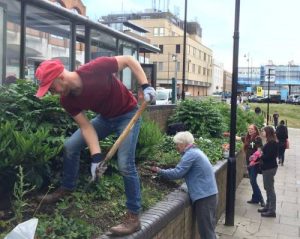 But let’s be very honest – we are but a handful. So, coupled with our desire to takeover the unloved street corners, we have a bold vision – to work with any organisation or group we can – to add to this activity where it is already being done; where the community gardens and corners are already being cared for, and have been for years, by faithful gardeners and shrub-mad potterers.

So my heartfelt plea to you, is get out and do this; it’s not just about your garden, but it is about your patch, your neighbourhood. If you have a few spare seedlings, use them! You don’t need to be part of us, but you can join if you need support or want some other friendly rebels to help. If you believe that people matter, then the planet and the plants matter too.