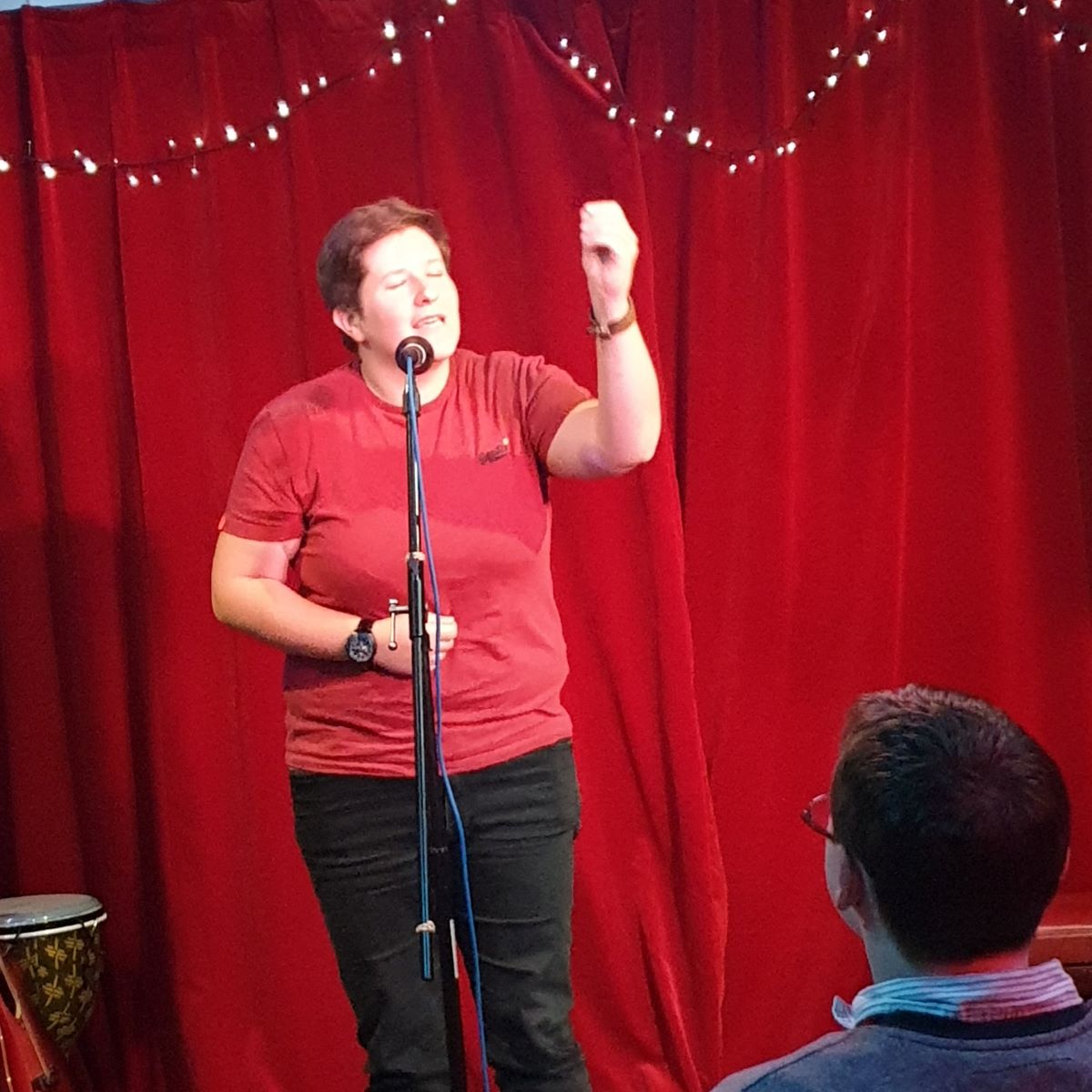 Southampton- based spoken word poet Jayne Ede, who was born in Brighton, says that words are her “favourite and sharing them a bonus.” Jayne is a very familiar face to regulars at the Art House, where she has worked as a volunteer, where she became a most valuable audience member to various different performance and art events, and where she is now one the hosts for the slam competition Hammer and Tongue Solent. Jayne is a regular performer at several Southampton events and was in fact one of the winners of the slam Hammer and Tongue Solent.

How it all started

As a child, as well as later on at university, Jayne wrote a lot of poetry and also did a lot of sketching. Additionally she gained an interest in listening to rap and hip hop music at university, which became a strong influence on her writing style. Even though she regrets that this was the period where she got out of the habit of drawing, this was equally the time her passion for music took over and made her get more deeply involved in the spoken word/poetry circle, and subsequently kept stumbling across more and more spoken word poetry. 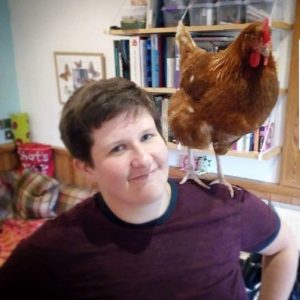 She wrote her first spoken word piece five or six years ago, “How Not to Speak to Chemists”, and writing it proved to be a very satisfying experience, even if it took her a long time to decide that it would eventually meet a microphone.

It was the variety of artists she saw and listened to that gave her the motivation to do her own writing; musicians such as Aesop Rock and B Dolan with their wonderful skill using vocabulary. Nowadays, it is the different local performers she has met and admires that inspire her. Poets  Stewart Taylor and Damian O’Vitch are two of the local poets she looks up to the most, due to the way they use and play with the words, combine techniques and create incredibly interesting material. She also takes her inspiration from other performers, two of the ones who stand out in her opinion, are Clare LeMaster and Zena Edwards. She describes them as being “all dreamy.”

When it comes to her own writing, Jayne tends to write about her own personal experiences, sometimes more emotional ones, others simpler. She states “I often try to deliver punchy poetry about things I’m angry about but it never turns out how I want, so I usually default to sarcasm… I’ll get better.”

It was when she was a volunteer at the Art House that Jayne learned about events such as Moving Voices, a spoken word open mic which takes place on the last Friday of every month. She was on a shift one day when it was on, and it completely blew her away. She was thus encouraged to actually attend the following month and become unconditionally captivated, above all because Moving Voices received her in such a welcoming atmosphere.

When at spoken word events as an audience member, Jayne will be the most attentive, fascinated person in the crowd, cherishing and absorbing every single word.  She is, in fact, one of the people that make the welcoming atmosphere she admired so much at Moving Voices initially a reality, regardless if she is hosting an event or just sat in the audience.

Jayne is a “Stockhampton” poet. That’s right! This phenomenon happened after she became one of the finalists for the slam Hammer and Tongue Solent and represented Southampton, along with the two other finalists, Damian O’Vitch and Duncan Green, at the Royal Albert Hall. That night, throughout every performance, there would be a projection with an image of the poets’ city, but unpredictably, for Jayne, Duncan and Damian the chosen image was one of Stockholm, which initially confused them (their city suddenly looked quite different), but then became source of many giggles and smiles afterwards.

Jayne, Duncan and Damian wrote material for this overwhelmingly social event and, with the valuable help of Stewart Taylor, they edited all their material, collated it and rehearsed intensely to prepare for this unique experience.

In fact, during our conversation Jayne emphasised several times how much she is thankful to and admiring of Stewart Taylor. She confessed she had never been into drama and was therefore struck by stage fright with this experience, therefore Stewart’s help and mentoring, where he taught them theatrical techniques, put her a little more at ease. Furthermore, the material they performed together was the result of attending some of Stewart’s workshops.

Even though the Slam Competition didn’t take place in the Hall itself, Jayne describes it as still a large imposing auditorium, which caused a lot of nerves, despite the friendly, healthy environment amongst all participants. All in all she thoroughly enjoyed this unforgettable experience.

Rhythm is the first to appear for Jayne when it comes to creative writing; and this happens to a degree that frustrates her sometimes, as the words struggle to appear. Some other times she has the idea for a topic, but the words fail her again. But despite this struggle, words turn up eventually, and Jayne’s compelling and enthralling performances prove how worthwhile all these struggles are.

Jayne  has no current projects underway, but has quite a few ideas in mind. One of them is to embark on a collaboration with another poet. Bearing in mind that rhythm is of such utmost importance to her, she would like to work with someone who has similar dynamics, thus making both writing process and performance natural and complete.

As a personal project, she would like to learn how to make electronic music, due to her passion for music and her natural inclination to focus on rhythm before she combines it with words.

Jayne enjoys doing many things and some of them are the source of inspiration and motivation she uses in her writing; namely: music, hiking, walking, and being in the hills, in nature.

One of her other interests is working with young people. When asked how she would guide and what she would advise to a young starting poet, she said: “read and listen to as much poetry as you possibly can; figure out your own style, what you like; set yourself a challenge (for instance, write a verse a day and then complete a poem with these verses by a given time); go to gigs.”

Of a grief depiction.

And what I write is an experiment to ease the symptoms

And relieve the friction

Amid the crisis of the purest heart that beat extinguished

In the briefest instant

So lets begin then

Every muscle conjuring a screaming infant

And waves of protest

And thrashing in an effort to escape the moment

A shapeless wretched for the stars to mourn

Maybe some of you experienced complete rejection

Of those waking seconds

Where every morning is a ritual of deep reflection

As you greet the bedroom

Releasing each time I repeat myself

And perhaps you are familiar with the deep unease

That comes from absent feelings

Or the wonder if this emptiness is self-relieving

Or a part of grieving

Yet in the freedom

Attempt to breathe and

The very air and that which sustains us

I took for granted as being painless

Have formed and reformed in neutral spaces

As mesh and cables

In which to cage us

And I still see him

In notes and margins

And lists of questions I would have asked him

In pints of cider

And sea and sky!

And you simply walked in

And god, I knew I was asleep but I still walked across

And then you started talking

And your smile was gorgeous

And it was fucking awesome

If you can study hard

Describe the formation of an ox-bow lake

Work on your handshake

In amongst your study breaks

Quote a couple acts from a Shakespeare play

Read the back catalogue of AQA

In past papers get 9s and 8s

I’m sure that’s an important change)…

If you can spend a little time on your interview skills

And a maximum of 2 weeks ill

Get your nine to five a day

Get some numbers anyway

Stack them up and generate

To help you differentiate the hours you’re awake

Should be asleep or counting sheep

And any pets you have alive

There is a creature

She’s armed with feathers and claws

Moves with a curious demeanour

Just a foot from the floor

They call her raptor and she captures

And catching serpents and mice

And she is chopsticks and Miyagi and unfortunate flies

I say they’re rolling the dice

If she’s patrolling her zone

She’ll rip a spider from inside her two dimensional home

They made a murderer and furnished her with wattle and comb

And her relations are cretaceous through a common genome

Now I don’t claim to be the expertise in digging up fossils, see

And I don’t believe I need degrees in paleontology

It’s just easy to conceive she shares a certain biology

With a species from a piece of recent cinematography

To the way that she walks

Or the ingredients she seems to keep obsessively warm

She’s the nearest to velociraptor I ever saw!

My pet chicken is a dinosaur.

But her ancestors straight up survived a meteor strike

And if I had to make comparisons and keep it polite

You and your four legged domesticate are bark and no bite

See every morning we’ve been drawing up a wicked rapport

And getting rid of them because they have no practical use

And shoots the breeze with ancient peoples and celestial Gods

This enchanted winged biped makes my breakfast and more

She is my prehistoric mythologic miracle cure

Something you shouldn’t forget