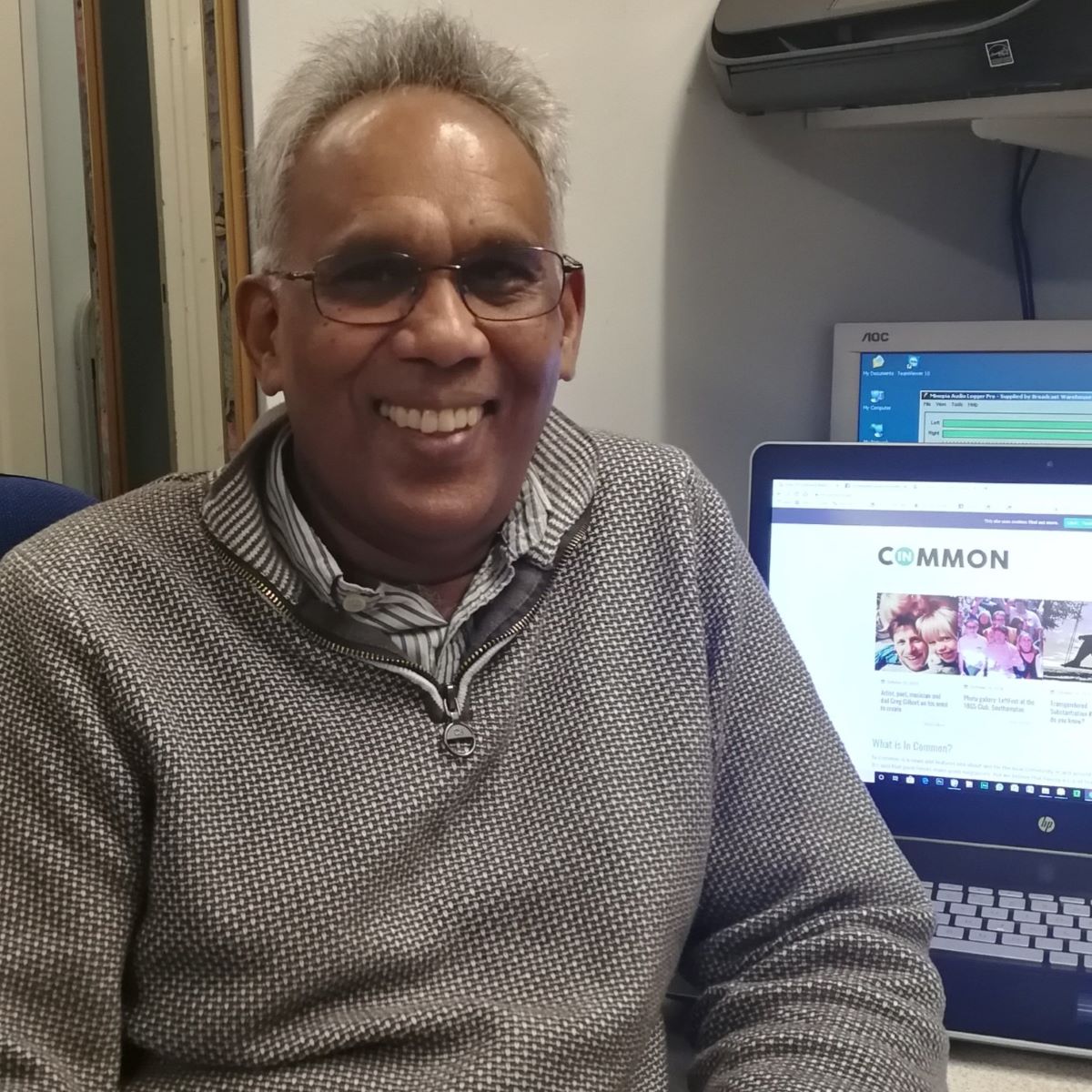 “I said ‘I’ll make it work. I’ve always been determined.’” Anyone who has met him will know that’s Kelly talking– Ram Kalyan. He could have been talking about any one of his projects, but he’s explaining how nearly 20 years ago he turned a four week temporary radio project with a narrow south Asian focus into Unity 101.

Returning to Britain after working a spell abroad, Kelly got involved in the Community Media Association’s campaign and lobbying for the legislation that established community radio, so having worked at Radio Luxembourg, Capital and the R1 Roadshow, a community station was the next step. Unity broadcasts 24 hours a day in 10 languages with a schedule that covers Asian-style Hip Hop, Urdu poetry, Chinese culture, Afro-Caribbean news, Southampton issues, and a lot more.

Kelly began in music – promotion and DJing, and that’s the core of Unity “We use music to bring people together,” he says. “Music reminds you of who you are, as well as language. So we use music to engage people and to underpin a raft of  services across the public, private and voluntary sectors.”

Kelly and I meet in St. Mary’s Road in the shop front building he originally got on a six month free lease. It is now the radio studio, Unity Art Gallery, and the centre for Kelly’s many other projects that grow out of Unity:  the Derby run in St Mary’s; the cricket festival; Unity 101 football team; Hands of Love – celebrating the contribution of Asian, Black and ethnic minority people to the NHS. No other event recognises Southampton’s diversity so broadly as  the Unity 101 annual awards dinner which brings together business, community, education, arts and civic leaders.

Unity was built from scratch, with Kelly raising the money, and making the most of the equipment he could find, relying on his knowhow as an electronic engineer. He worked with tech wizard Matt Auckland, who sadly passed away last year. From cassettes, through CDs, Unity is now using remote broadband-based kits to send in content form a variety of organisations and locations. Kelly also sets up studios in schools and colleges – often using equipment the college has but doesn’t know how to use – which enables young people to develop their skills, and create content that he will find room for in the schedules. He has even built studios in India and Pakistan to create more community connections.

As well as getting professional quality sound, Kelly has set up a certified 30 hour training programme for presenters to provide quality programmes and give people real media skills.  He has trained 278 people, and the station currently has 68 volunteers “Our job is to entertain, educate and inform,” Kelly says, “and we do it for the community, by the community and to the community. People come in and do things, and I provide the other bits.”

Do it from the heart

By ‘other bits’, Kelly means fundraising, the building, the studio, the kit, the licence, the training, and everything else. Kelly’s life is Unity 101.  “You know, I can’t understand me sometimes. In 19 years I’ve never had a day off. I work 7 days a week, average 14-15 hours a day.”

“My mother used to say, ‘If you’re going to do something – do from the heart, but don’t think what you’re going to get.  Because somehow it will come back in different ways. I’m very healthy. I’m very satisfied.”

So actually there is only one project – Unity, Community, Family. Kelly talks of engaging people, involving, supporting. Rather than focusing on raising money he barters and trades what he can, finds partners, builds relationships; shares technology, shares food, and builds the volunteer family.

“The love I get from the community and the volunteers is wonderful. I’m very lucky. I go out of here, and the sweet shop people say ‘Come and try these’, and the kids say ‘Hello, you alright?’ And I’m the kind of person that if someone wants my help, I’ll say ‘Let’s do it’. I’m very content. And what I want to do is leave a legacy, to know that we made a difference.”

The good news is that Kelly isn’t going anywhere “I love Southampton, the people are tolerant, understanding, caring…. okay, there’s a few odd ones…. but they are fantastic wherever they are from. Southampton’s changed a lot since I’ve been here, and I think the city is growing in the right way.” Kelly says that we need to strengthen the links between the outer wards and the city centre, “so that people feel that this is all my city, rather than a city they go into. It’s a fantastic place, and there is always something happening.  Let’s be proud, yeah?”

Unity Radio broadcasts on 101 FM and at www.unity101.org