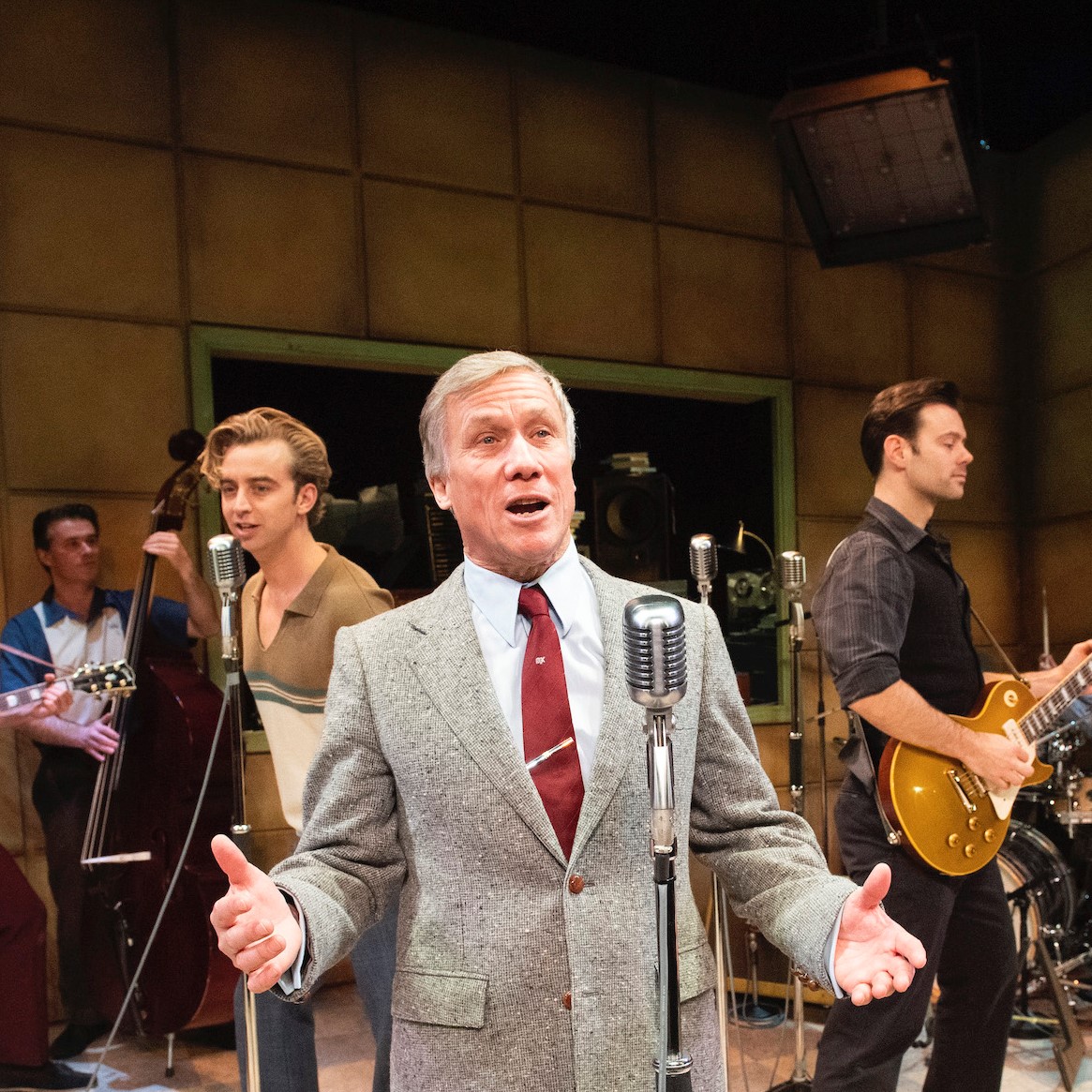 There is a ‘Whole Lotta Shakin’ Going On’ at the Mayflower Theatre this week, with the most famous recording session in history! In these troubled times, the ‘Million Dollar Quartet’ is pure entertainment – a joyous celebration of the birth of Rock and Roll.

I was reminiscing before visiting the Mayflower Theatre to see the show. Memories of this Jerry Lee Lewis classic were part of the foundations to a personal musical career that has lasted over 50 years as a performing musician. This show had a lot to live up to and it didn’t disappoint.

The authentic looking stage set of Sun Records studio drew me into the Memphis of 1956. I have been to see the real place and it’s very similar. The story tells the audience about when a young Elvis, Carl Perkins, Jerry Lee Lewis and Johnny Cash were at the dawn of rock and roll music. Having been discovered, they were nurtured and encouraged by the owner of Sun, Sam Phillips.

The familiar face of former Blue Peter presenter, Peter Duncan, takes the role of Phillips. He is exceptionally good and leads the audience through a narrative journey of the time these rock and roll stars were developing their craft at Sun Studios.The actors portraying these pioneers don’t just play the roles but play the music live. Gifted musicians, they brilliantly impersonate some of the most revered names in music without succumbing to caricature.

Ross William Wild’s performance as Elvis, particularly his singing voice, is very good. He doesn’t look that much like Presley but he gets the audience rocking along and has all the trademark moves.

Robbie Durham stands out as Johnny Cash with his deep voice and physical similarity. He provides a country music and gospel-influenced contrast to the harder rock – he says he doesn’t want to “sound like everyone else” and doesn’t. Phil Warson plays Carl Perkins and his main contribution is his stunning lead guitar playing. He also has a rather grumpy air – a consequence of his one great hit – “Blue Suede Shoes” – having been stolen by Elvis!

But for me the star of the show was the Jerry Lee Lewis of Matthew Wycliffe. Jerry Lee is the new ego on the block unhindered by humility – or lack of talent. He attacks the piano with his right leg bouncing up and down extravagantly to the rhythm. Quite superb. A word of praise too for Katie Ray who plays Elvis’s girlfriend Dyanne and sings several numbers herself.

However the songs in Million Dollar Quartet are the real stars and provide an incredible soundtrack to this true story.  Warning, be prepared for uncontrollable toe-tapping, hand clapping or even dancing in the aisles.

The mid 1950s was the time that popular music as we know it really began. Where hitherto the charts had been dominated by the likes of Frankie Laine, Doris Day, Frank Sinatra and Perry Como by 1955 the glimmerings of a revolution appeared when Bill Haley had a hit with Rock Around the Clock. Then the following year there was Elvis – and the musical world was never quite the same again. As studio owner Sam Phillips says “Kids don’t want to listen to their Mum and Dad’s records anymore”.

This Tony Award winning musical was a huge success on Broadway when it started in 2010. The 2020 production is at Southampton’s Mayflower Theatre until Saturday 14th March before touring nationwide. Don’t miss your chance to discover the true story of one unforgettable night that made rock n roll history!