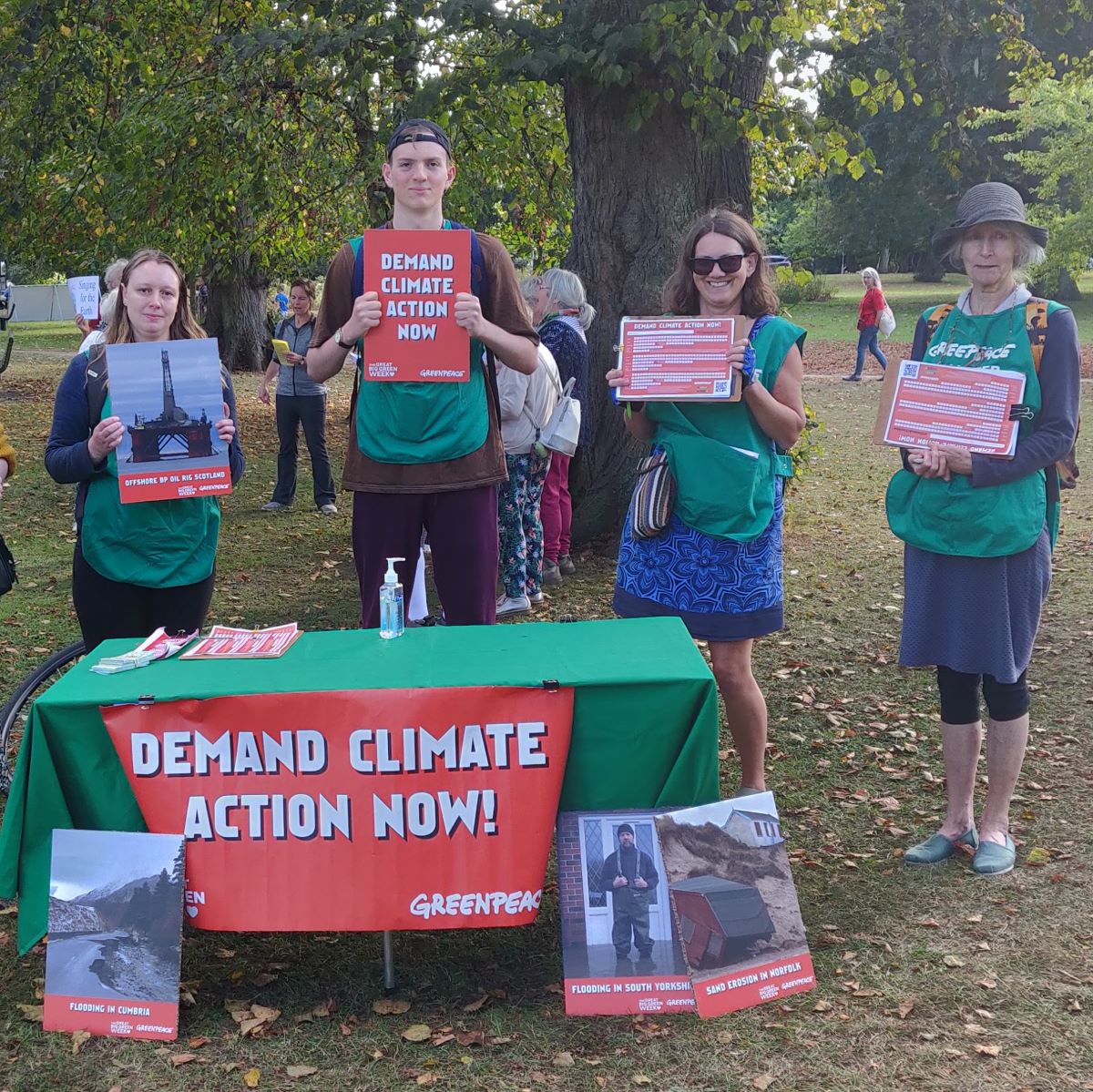 Volunteers collected hundreds of messages from local people about the hopes they have for a greener future, and what they’d like the Glasgow climate summit to achieve. Messages from all over the UK will be displayed at the conference in Glasgow, so world leaders know they need to act now. Members of the Southampton Group also crafted their own message onto a 10mx20m tapestry map of the UK, which will be carried during the march in Glasgow on 6th November.

Volunteers also surveyed passers-by about their views on Government’s action on climate, these results will be released in October.

Rosie from Portswood said ‘On Sunday, I joined other Greenpeace Southampton Group volunteers to talk to people from the local area about the action they want our Government to lead at the Glasgow climate summit this autumn. We’ve seen a summer of extreme weather, with fires, heatwaves and floods causing hundreds of deaths across the world. And the recent UN report into climate change gave us the starkest warning yet that action is needed urgently.

‘However, people I spoke to are positive that we can seize the moment provided by the climate conference and create a greener, fairer future for people in Southampton and across the globe – if the UK Government leads by example. Come on Boris – be a climate leader, not a climate loser.’

Examples of messages collected are: “Take your head out of the sand” – Kate (Southampton),  “I’d love to feel like the government cared” – Jason (Southampton),

“I feel heartbroken the government is not doing more” – George (age 12) (Southampton) and “Boris is not listening to the public” – Lydia age 11 (Southampton).

A Greenpeace Southampton spokesperson added “As the host of global climate talks, Boris Johnson wants to be seen as a world leader on climate. But recent proposals for a new coal mine in Cumbria, the support for new drilling at the Cambo oil field, and the scrapping of measures to help people cut carbon from their homes expose the Government’s claims of world leadership as hollow.

“Greenpeace Southampton Local Group is calling on the Government to limit global temperature rises to 1.5° Celsius in order to avoid the most devastating impacts of the climate crisis. This includes an immediate ban on all new fossil fuel projects and a strategy for ending fossil fuel use altogether, with proper support for workers and communities to transition to jobs in green industries, like renewables and energy efficiency.

“Leaders must also make good on, and increase, the promised $100bn per year in climate finance to countries hardest hit by the climate crisis.

“Lastly, Greenpeace Southampton Local Group is demanding that all leaders commit to strongly protecting at least 30% of land and sea by 2030, respecting the rights of indigenous people and local communities who depend on them. This must include legally binding targets in domestic and international law to begin to significantly reverse the decline of nature by 2030 starting now with immediate action to halt deforestation.”