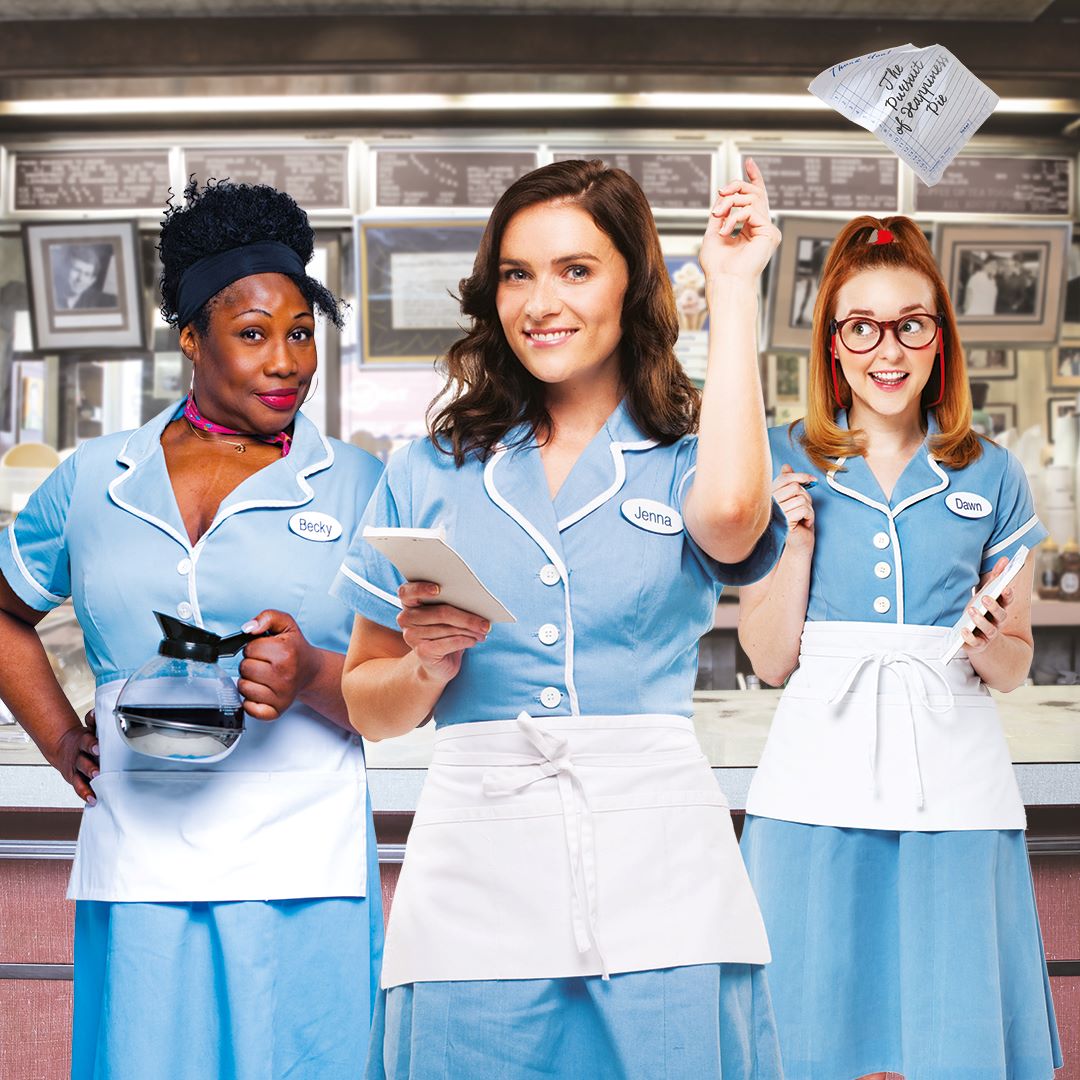 Waitress isn’t quite The Great British Bake Off but it is a recipe for success!

It was the first Broadway musical with an all female creative team. Music and lyrics are by Grammy nominated singer-songwriter Sara Bareilles, who manages to write hook laden songs about waiting for a pregnancy test, not wanting a baby, abusive husbands and messy love lives with some style.

The musical is based on the 2007 film Waitress. It tells the story of Jenna Hunterson, who bakes a different pie each day for the pie shop where she works as a waitress. In an abusive relationship with her husband, Earl, Jenna unexpectedly becomes pregnant. She begins an affair with her married doctor, Dr. Jim Pomatter. Looking for ways out of her troubles, she sees a pie baking contest and its grand prize as her chance for a better life.

Jenna’s unwilling acceptance of impending motherhood is painfully honest and her affair with her married gynaecologist is surprisingly touching. Their duets, ranging from It Only Takes a Taste to You Matter to Me, capture the progress of their guilty passion.

Chelsea Halfpenny gives Jenna a vulnerability, kindness and inbuilt sadness that finds release in her extramarital fling. She also delivers her big solo with real verve. The show is a tribute to female solidarity and Jenna  is excellently supported by her fellow waitresses.

Wendy Mae Brown as the bawdy Becky, says of her own sexual neglect that “it’s so quiet down there you can hear an echo”! Evelyn Hoskins as cookie waitress Dawn  eventually discovers happiness with Ogie, played superbly by George Crawford.

Matt Willis is very believable as Jenna’s nervous lover. Michael Starke as elderly pie shop owner Joe, a type of fairy godfather with a soft spot for Jenna, lends weight to the show.

I expected something much less touching, gritty and moving, though Waitress does serve up its fair share of sugar and has a genuinely warm heart. Adapted from Adrienne Shelly’s cult 2007 indie flick of the same name, Waitress is a musical full of flawed, morally compromised characters. Everyone, on some level, lets us or themselves down.

The male characters are a bit cartoony and the women, particularly Jenna and her two waitress friends Becky and Dawn, have almost all the good lines. The exception is the hilarious Ogie, the hyperactive loon who courts and marries Dawn.

The big showstopper, She Used to Be Mine, delivered with exquisitely controlled sorrow by Chelsea Halfpenny is Jenna’s bitter ode to her disappointment in herself.

In Jenna’s scenes with husband Earl, played by Tamlyn Henderson, the threat of violence is always latent, but barely displayed. We don’t need to see physical violence to recognise an abusive, coercive and toxic relationship that Jenna wants to escape.

But then there’s also the silly Waitress that desperately wants you to have a laugh, and not let the serious side dominate. That Waitress even features a pie-based scene of a sexual nature.

The ending is swift and certain, resolving many problems with a dusting of icing sugar. But the show is never too sickly sweet not to have serious points to make, and to make them forcefully.

All in all, Waitress is a tasty treat that leaves a pleasantly sweet taste in the mouth. Forget The Life of Pie this show will make you Hap-Pie!