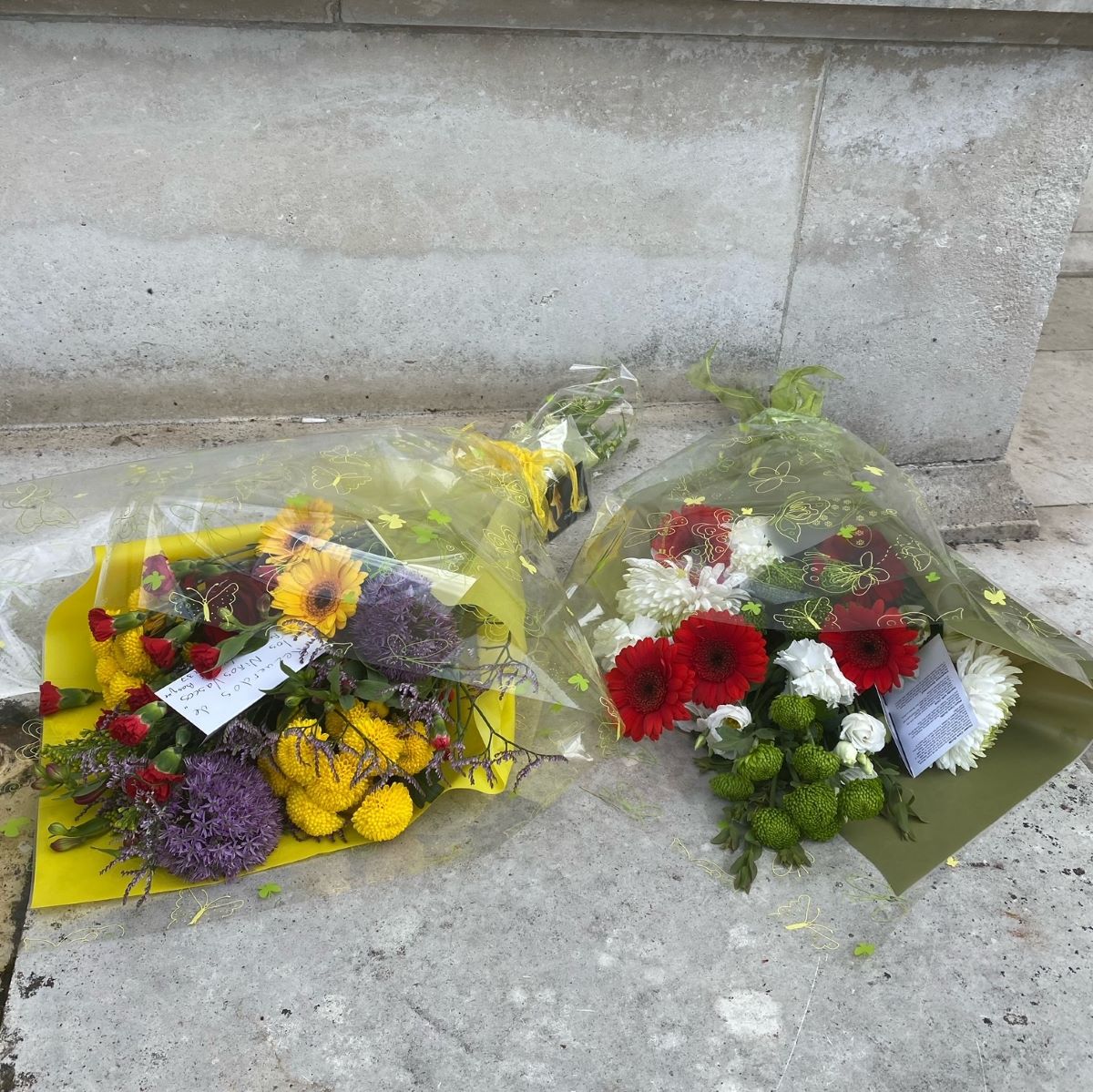 “Sometimes I Feel Like a Motherless Child” – this 19th Century spiritual song has had many versions, notably by Paul Robeson in the 1920s. It was sung by him at a 1930s charity fundraising concert for the Basque children at the Albert Hall. 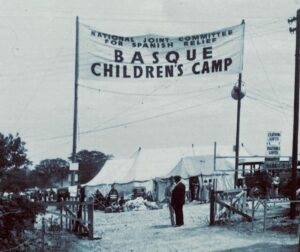 The song was often in Prince’s live set and Southampton resident Michael Kiwanuka has recorded his version. It was also the opening song at the 1969 Woodstock festival performed by Richie Havens.

The Basque Children and Southampton is still a little known story but one that seems all too relevant today.

85 years ago on the 23rd May 1937, 3,682 children arrived in Southampton on the SS Habana though it was only meant to carry 800. They had left the blockaded northern Spanish port of Bilbao along with 95 teachers, 120 helpers, 15 Catholic priests, 2 doctors and 5 Red Cross nurses.

Bilbao is the main city of the Basque Country, which has its own language and culture. Nearby Guernica had been totally destroyed by German bombing on 26 April 1937 with over 1,600 dead. The Nazis acted in support of General Franco and his Nationalist forces. Picasso’s famous Guernica painting was his response to show the horrors of war.

On arrival the children were taken to a 400 bell tent camp at North Stoneham. There was no financial support from the Conservative government led by Stanley Baldwin, who didn’t want to take sides in the Spanish Civil War that had started in July 1936. The evacuation from Bilbao had been led by the Basque Children Committee supported by Labour MP Leah Manning. A Bilbao square was named after her in 2002. 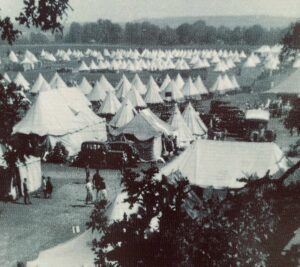 An escape by some children who had heard that Franco’s fascist army was in control of Bilbao was used negatively by those that didn’t want them here in the first place. Such incidents were especially highlighted by the Daily Mail who took the view that as we were non combatants in the Spanish Civil War we had no need to take in refugee children.

As summer 1937 was fading, groups of children were moved to 94 homes called ‘colonies’ and to existing Catholic and Salvation Army run orphanages.

About half returned to the Basque region by 1939 but once WW2 started that September, returning was more difficult with 450 still here in 1945. Some were orphans of the Civil War, some parents had fled into exile and some were in Franco’s jails, as just listening to the BBC could result in a jail term.

The Basque Children Committee looked after remaining children until 1951 when the youngest refugee had become an adult. Nearly 300 children stayed permanently in Britain and about 12 are thought to be still alive. Former MP turned broadcaster Michael Portillo’s father was a Basque refugee. 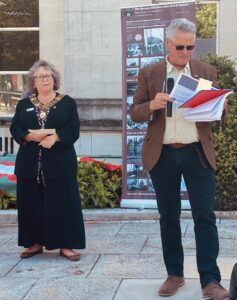 There are some football links between Southampton and the Basque region. The Bilbao football team’s  red-and-white stripes date back to 1909, when one of the players brought back a set of Southampton shirts from England.

Sabino Barinaga and Raimundo Perez Lezama, both 14,  were among the 4,000 Basque children. They were placed at the Nazareth House Catholic orphanage in Hill Lane, Southampton and their football talents were spotted. As a striker, Barinaga scored 62 goals in 18 league and cup matches for Southampton’s B team. When World War Two broke out in September 1939 competitive matches were replaced with unofficial leagues set up by the FA. Barinaga played half a season in those tournaments, scoring a further 22 times in 14 appearances. He returned to Spain in 1940 and signed for Real Madrid where he was the Spanish giants’ record scorer for a time. His compatriot Lezama played for Saints first team, as goalkeeper, on three occasions.

He returned to Spain in 1940 and eventually joined Athletic Club de Bilbao, where he became a club legend during his 16 years as a keeper.

On 21st May 2022 to mark the 85th anniversary the Mayor of Southampton Jacqui Rayment attended a ceremony by Southampton Central Library.

Organiser Tom Wardle of the Basque Children of ’37 Association, said: “I think this is a really important chapter of this city’s history. It was a time where people showed generosity and solidarity towards those displaced children.” Relatives in attendance included Simon Martinez whose father Enrique Martinez was 12 when he arrived in Southampton.

The ceremony was followed by a showing of the very informative 2005 documentary film Guernica’s Children which contained much original footage. The Southampton based director Steve Bowles then answered questions.

On 19th September 2022 a polished marble memorial by Maite Pinto to the Basque Children will be unveiled in Town Quay Park. Next to it will be a new sculpture by Anthony D Padgett called “Picasso’s Guernica Dove” as central to his painting was a dove crying out in anger but just with one tear.

Southampton today is a City of Sanctuary building on its reputation as demonstrated by its welcoming of the Basque motherless child refugees. 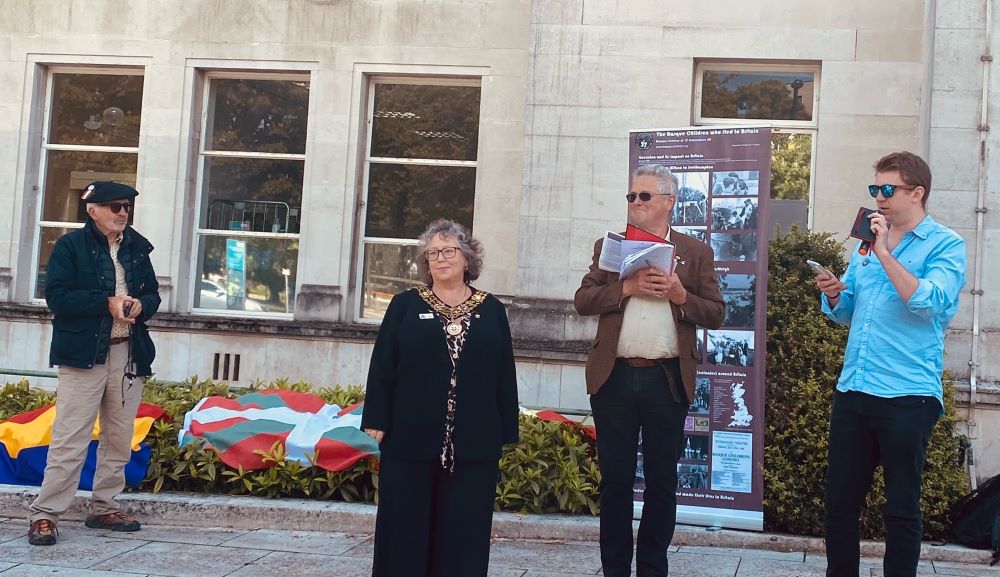