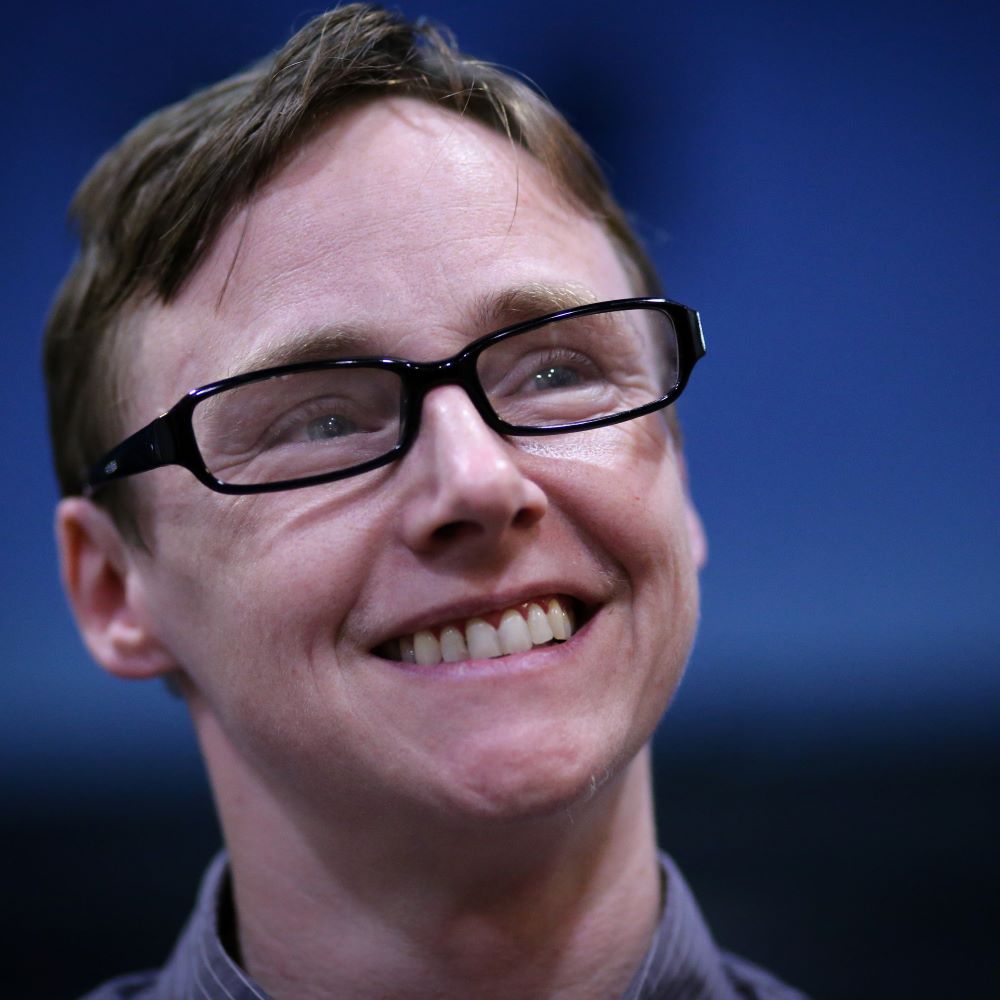 Ash Brockwell is a multi-talented artist in various areas, but most recently you may have become acquainted with him as the editor of the poetry anthology ‘TransVerse: We Will Not be Erased’. His artistic talents started at a four or five, when he drew on the wallpaper, which he remembers as “not going down well”.  The first poem he can remember writing, when he was about six or seven, was about a child who planted an acorn and watched it grow into an oak tree.

Always in the background

Drawing and painting accompanied him throughout his childhood. He did GCSE art at school, as well as a short course in illustration at college. However, despite this constant presence, he says he let himself get talked out of taking up art as a career, and ended up doing a science degree at Oxford instead.  Nevertheless, poetry and songwriting have always been somewhere in the background of Ash’s life, though he has only managed to have the time and head space to dedicate himself to these seriously in the past three years, since he gave up his nine-to-five job and started his own business as a freelance consultant.

In 2012 he also rediscovered his joy for painting, after a forward-thinking therapist steered him in the direction of Julia Cameron’s book ‘The Artist’s Way’.  This had a great impact, as he explains: “I’m pretty sure it saved my life, as my mental health was in a really bad place at the time. I was in a religious group that didn’t accept what I then saw as my sexual orientation, but now realise was actually an expression of my gender, and I was close to suicidal from being told I just wasn’t praying hard enough”.

Writing seems to come naturally to him, even though painting is a source of great satisfaction, especially in those moments when he needs to work off a lot of anger or stress by throwing paint at canvases and attacking them with palette knives, or sometimes even tearing them up and then sticking them back together in new combinations. Ash considers himself a very energetic, but messy painter, who is rarely satisfied with his work – viewing most of his paintings as ‘works in progress’ even after they’ve already been exhibited.

He has always thought of poetry and songwriting as different things; however, he has recently noticed they have started overlapping more, and has rediscovered the fun of writing lighthearted rhythmic verse for its own sake without necessarily having a tune to go with it.

Ash says his inspiration comes from either intense emotion or being out in nature (‘walking the Land’, as he likes to call it), in the case of poetry. He adds that poems often pop into his head at night, if stress is keeping him awake. His poetry tends to be more autobiographical and lately most of his poems are connected in some way to his gender transition. 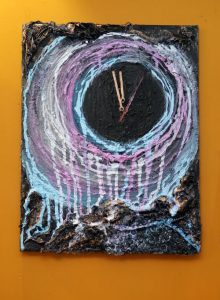 When it comes to songwriting, he often finds that if he’s out walking in the New Forest with no traffic noise and nobody around, songs will start to come into his head, melody and all.  A lot of his songs are around the theme of spirituality interwoven with nature. Ash is currently working on a song cycle, ‘The Nineteen Songs of Remembering’, which follows the seasons of the year and the different archetypes associated with each season.

As for authors or other poets that inspire Ash, he cites T.S. Eliot as one of the main influences. He remembers copying the rhythm of ‘Skimbleshanks, the Railway Cat’ for a poem about homeless people sleeping in a train station when he was just twelve. His English teacher told him that she loved the rhythm, because it sounded like a train, but he never owned up the fact that it was directly ‘borrowed’ from Eliot. His favourite poem by T.S.Eliot is ‘The Love Song of J. Alfred Prufrock’, which inspired one of the poems in ‘TransVerse’.

Ash is also a great fan of e. e. cummings, whose poems he describes as “deceptively simple, almost childish in appearance, and yet containing such profound meanings.” ‘The Lake Isle of Innisfree’ by W.B. Yeats became Ash’s all-time favourite poem after he heard it read aloud by an elderly Irish storyteller in Sligo in 2012, sitting at a long wooden trestle table in a converted castle, when he was visiting for a conference. He said it made his heart completely melt. Wendy Cope is another of his influences, mainly for the way she combines very traditional forms like the villanelle with thoroughly modern subject material. When it comes to songwriting, he takes his inspiration from Byron, Wordsworth and especially W.B. Yeats  not just the rhythms, but also the themes. 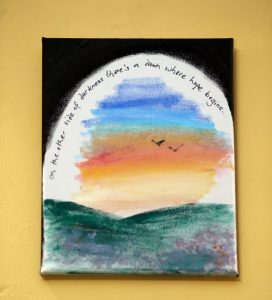 Ash’s job as a project design and evaluation consultant also provides him with a lot of scope for creativity, not just in the projects, but also the workshops he facilitates. He has recently started finding new some clients in the arts sector and is currently working with a project that’s a perfect fit, as it’s completely focused on making the arts more inclusive and accessible to people from marginalised communities, which is a theme that’s very close to his heart.  In relation to his job, he says, “I’m not averse to throwing poems or song lyrics into my workshops, if the setting is right for it.”

Cheryl Yambrach Rose is one of his favourite visual artists, although he has a completely different style to hers. He profoundly admires ‘Art through the Eyes of the Soul’ for being a stunning set of paintings representing legendary spiritual leaders, broadly in the style of Old Masters but with meanings on many different levels, which have been adapted as oracle cards.

Alongside the ‘Nineteen Songs of Remembering’, Ash is also working on a handbook that delves deeper into the meanings behind the songs and how to ‘sing them with your heart as well as your voice, for a year and a day’. He also has plans for a novel, set in seventh-century Britain and based on the story of a trans man who runs away from an arranged marriage to pursue his dream of training as a pilgrimage guide in the Welsh mountains. 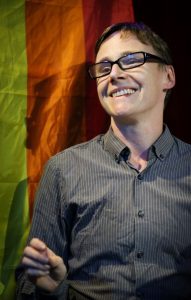 ‘TransVerse 2’ is one of the next projects in mind, although the contributors are still working out what it could look like: whether to do more of the same, or focus on a specific theme like mental health or suicide prevention in the trans community, or maybe create something that could feed into the new LGBT-inclusive relationships education curriculum for 2020.

Ash is one of those people who is always keeping busy, has various projects on the go, and very rarely finishes any of them – so he’s proud of himself for getting ‘TransVerse’ to the stage of being a published l book and an exhibition!

These are three of the poems and paintings that are part of TransVerse, the anthology and exhibition:

Your ‘AFAB’ Does Not Erase Me * 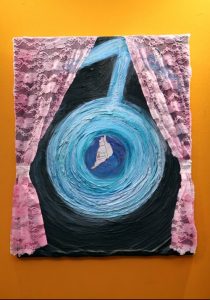 And yet you imagine a word

on a forty-year-old page

can invalidate all of these?

grew up behind net curtains with my secrets concealed inside,

where nobody (and least of all me)

understood quite what was denied.

I refused to answer to my given name at five,

and spent their weekends shopping for pink lace bras:

that was all I knew. There may be things I never tried to do,

because it just wasn’t ‘done’, with that net; and many things

that I didn’t say, and couldn’t have said, however I tried,

because the words weren’t even invented yet.

There wasn’t a language, then, for people like me.

The teachers could have been fired for just saying ‘gay’.

So, in conclusion: secrets: kept.

Yet your ‘AFAB’ cannot define me now.

and if you dare try to delete me, I WILL resist.

Assigning pink lace flowers to hide what you can’t accept

than King Canute’s command ‘Thus far, and no further’

could ever hold back the inrushing Solent tide. Whatever

you choose to call me, whatever you say, I will ride the waves

to places you never dreamed, and live my self-made life

as my truest self anyway. There’s no way in again, now I’m out.

Because this is who I am, and have always been,

and the only alternative is…

Let’s not go there.

So take your eraser, take your net curtains, and go;

I am still here, no longer silent, at this meeting place

of sea and shore, persistently pushing on as the waves do,

and reminding myself day after day that there are no more

for the deep essence of a human soul to survive. 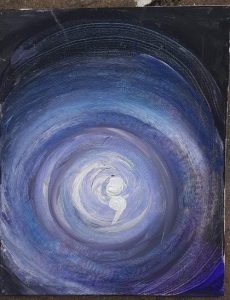 My sentence does not end here;

it goes on. I feared I couldn’t do this;

I was wrong. I thought I’d been extinguished;

yet a white-hot ember burns. I felt my radiance fading;

but your love, my oxygen, revives me, and the flame of hope returns;

even one more day? My story is not over, this is all I know;

the power of my heart my yet sustain this glow. The spiral spins;

the sun begins to rise, its soft light lifts me from my 3a.m. despair;

my breath is in its care. The sentence is reduced to life, not death;

my story will continue, my beloved friend, for this is not the the end;

I wish I could have loved that paisley dress

you gave me on the day that I turned ten.

(If I were male, would you love me less?)

I smiles through my tears, my mind a mess.

‘You’re double figures now,’ you told me then.

I wish I could have loved that paisley dress.

I had no words, no language to express

my grief for years that wouldn’t come again. 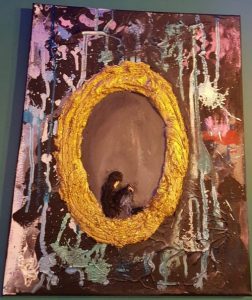 Yet still the image lingers, now and then:

I wish I could have loved that paisley dress.

It’s only now, at forty, I confess

my deepest dream to join the world of men,

And live as Me. (But will you love me less?)

Perhaps this truth will shatter my success;

I never could have loved that paisley dress.

(I wonder if you love me any less?)