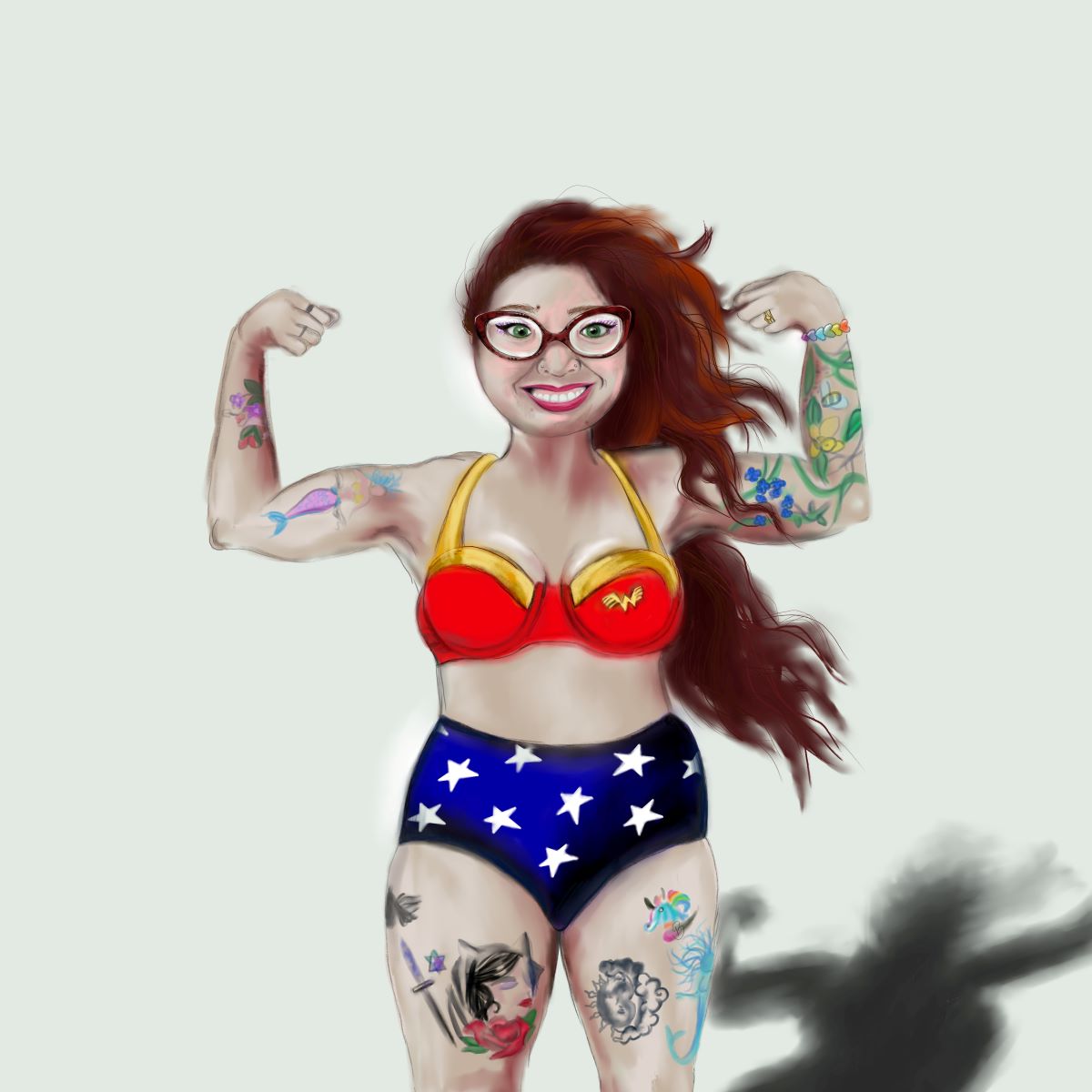 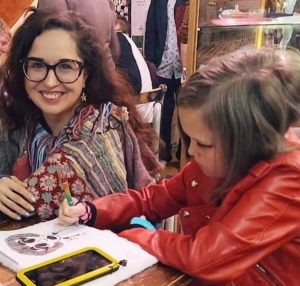 “I don’t want people to think that if something is difficult to do, they’re not cut out for it, because that isn’t true. I’m proud to be autistic and disabled. It’s part of me.”

These are the words of Southampton artist Spring Wise. Spring has spent her life doing things that were very difficult but that she wanted to do, so doing them anyway. One of these was roller derby. Until recently Spring, who currently has to use a wheelchair, skated with the Southampton City Rollers, with the moniker Tigermouse, and is still very much part of the team.

It was difficult as she has always suffered from pain and dislocations in her lower body due to a then undiagnosed genetic condition, Ehlers-Danlos Syndrome (EDS), which affects connective tissues supporting the skin, bones, blood vessels, and other organs and tissues. Throughout her life she has also suffered from various health conditions which were, in fact, down to EDS, but which were misdiagnosed and therefore not treated properly.

Over the last year, Spring’s EDS became much more severe, resulting in her having to completely change her artistic practices and also meaning that she is now receivcing the treatment and support she needs to best manage her condition, which is nevertheless extremely painful and debilitating. It also means that she has accepted not attempting to push through and try to do everything she wants to do, but to hold back a little, to preserve her joint function for as long as possible.

While her EDS symptoms have resulted in Spring’s huge change to her artistic practice, it was, ironically, art which, she believes, led to the double-edged sword of the worsening of her symptoms but also the diagnosis of her condition. 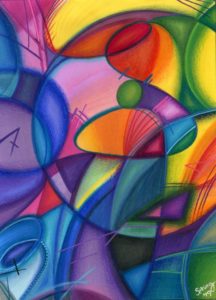 “I had never had problems with my hands before, but I experienced a rapid decline in my joint function in June last year. I think it was probably because I started a ‘drawing a day’ project in January 2019, and worked for longer every day and wanted to be a full-time artist,” says Spring, who is also a home educator and worked as a PA for someone with disabilities. “It put a lot of pressure on my hands and in the end by hands seized up and I also developed tremors and was in tremendous pain.”

As a result of what had happened to her hands, Spring was diagnosed with EDS in August last year. “It’s been helpful for me to have a diagnosis – though it would have been more helpful to have had it before I took up roller derby!” she says.

Spring explains that the diagnosis has influenced a change in her philosophy on life. “I have always been disabled, but before, I sort of believed that if I tried hard enough I could do anything, which sounds good but it wasn’t because it meant I damaged my body. Now I have a more realistic idea of how my body works and I’ve started to preserve my function, so that’s good for the future.”

The diagnosis of EDS also led to a further diagnosis, of Postural Orthostatic Tachycardia Syndrome (PoTS). Linked to EDS, PoTS is a condition where moving from sitting or lying to standing causes an unusually rapid increase in heart rate, often leading to fainting.

“Before, they didn’t know what was wrong and thought it could be anxiety, diet and so on. There are really specific things that I have to do to manage PoTS, so it’s really good to have the diagnosis.”

From portraits to abstracts

Prior to the severe worsening of her symptoms last June, Spring was best known for producing very detailed portraits of animals. The bulk of her commercial work was pet portraits, and she also did some family portraits, generally small and very detailed, in biro or fine liner.

“I can’t do that at all now,” she says. “As well as my hands seizing up, I get tremors and also have loss of sensation, so I can’t produced detailed work at this time at all.” 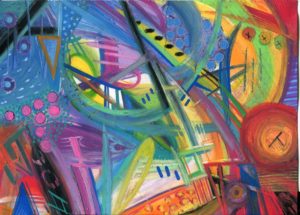 Spring is retraining in digital, art, with a view to produce portraits through this medium, and is excited to be learning a new skill. But the change in hands has led to a more significant adaptation in her artistic work.

“It has forced me to focus on abstract work,” she says. “That’s the work I feel really passionate about, but it’s not as commercial. It’s what I really like to do. Rather than reproducing something that is physically there, that anyone could look at, the abstract work is producing something new. It’s invisible until I create it.

“It’s expressing my experience of all the input in the world. It’s really personal and unique to my autism and the way I process sensory input and information. I think that’s interesting for people to look at.”

Spring had an exhibition of a selection of this work at The Art House, Southamton, in October, entitled Process/Integrate, dedicated to her late friend Tom Bandfield who, she says, “had the most extraordinary brain and a passion for art.”

“The work is my way of making sense of chaos. I take all the chaotic elements I’m receiving and create something harmonious. That’s my process for it.”

Spring doesn’t give her work titles, as she doesn’t like to tell viewers what to see.

“I create the piece and I’ve done my bit, but there’s more work to be done by the person who sees it. They are bringing their experience to it. I want people to have opinions about it, even if it’s ‘a six-year-old could have done that!’ That happens! If I give it a title or talk too much about what I was thinking when I did it, it hamstrings that conversation.” 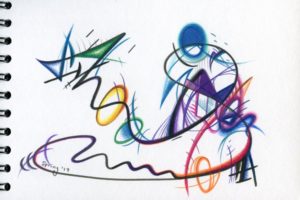 Spring says she has different reactions to her own work at different times, but shares all of it, with the exception of private commissions if she doesn’t have permission to do so. This is down to her philosophy on art.

“The most recent piece I shared, I hate it. I did it with oil pastels, which are a favourite medium of mine, but I have to use a special grip, so I had to take the grip off each time I changed colour and put it back on, so when I had a colour, I tried to predict where I would want to put it. It made it very slow and it also looks very different to my other work,” she says. “It doesn’t seem cohesive as a finished piece, but lots of other people have said they like it and I expect next month I’ll really love it.”

Value is in the doing

Spring says she finds it hard to separate the challenges she experiences when producing a piece to the finished product, but adds that it doesn’t matter if she likes them or not. She always shares her work on her Facebook and Instagram accounts, regardless of her feelings about it.

“I made a promise to myself not to censor according to what I think is ‘good enough’  – that would be almost none of my work. I feel with other artists, that their work doesn’t have to be ‘good’ to be valuable. What’s important is you making it, so I try to live by that myself.”

Spring says that she has never been very good at the business side of being an artist, but her friend and business manager, Bec Bartholomew, who Spring notes is also disabled, helps her to market her work, including making much of it available via Red Bubble, where you can buy everything from a greetings card or canvas to a water bottle or t-shirt with Spring’s work on it.

“It’s great, because it’s affordable art,” says Spring. “Most people don’t have a chunk of money to spend on art – I know I don’t – so it’s nice to be able to have it in an affordable way.” 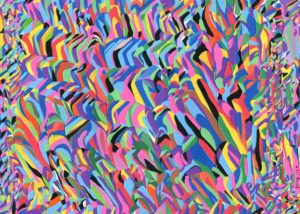 Spring also has commissions for tattoo designs, with people requesting something similar to particular pieces, designed for a specific part of their body. Some people also buy a work outright, so they own the rights to it and can have it turned into a tattoo.

“It’s very cool to have someone love my work enough to want to have it permanently on them. They are my favourite sales,” she says. “I usually get to see a picture of the tattoo too, and the tattoo artist has always done a great job.”

Although Spring is happy to sell most of her art, whether that be as originals or reproductions, there are some pieces that she would not part with.

“In my recent exhibition, there was just one piece that wasn’t for sale and that was the one I had most enquiries about – so I’m going to do a print run for that one. I just need to keep it.”

But, she adds, there are some pieces that are too personal to release into the world beyond her social media accounts.

“Very occasionally, I do something that I wouldn’t even sell a print of, because it’s just too personal,” she says. “The thought of someone having it Blu-tacked up in their bathroom or something would make me feel too vulnerable. It’s rare, because all the work is vulnerable, but it happens.”

As Spring chats easily and enthusiastically about art, roller derby and her diagnoses, it would be easy to forget just how hard many of the things now are, which she used to take for granted, such as creating art.

Our interview itself had to be put back by several hours, due to a rough night and Spring says at the outset that she feels very fuzzy. But she’s adamant that things being difficult is not a reason not to do them.

“I think it’s important for me to be a publicly disabled artist, because I think people’s expectations of disabled people are very low,” she says. “Also, people see art as an innate gift, something you can just do, which just isn’t true. If you have a degenerative condition, the way you work will adapt and change and be hard, but making art is hard, and you will find a way to produce it.

“Everything doesn’t have to flow like magic for you and your work to be valid – quite the opposite.”