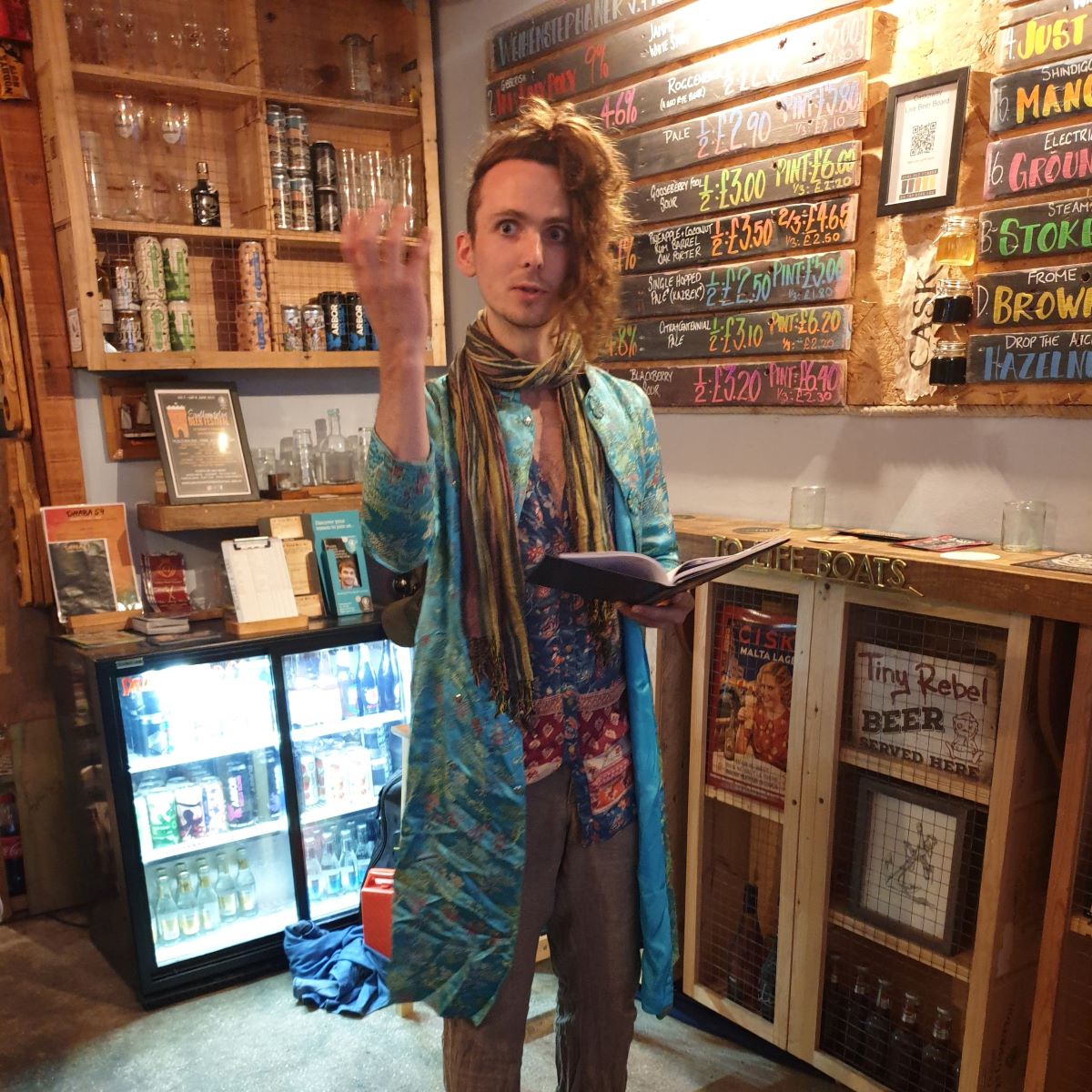 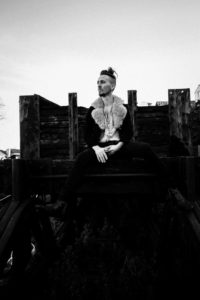 Henry Baroche is a well-known name to the cultural community of Southampton, though you may know him better as Mad King Ludwig from Mad King Ludwig and the Mojo. That’s right, Henry is an incredibly multi-talented human, and is a beloved musician, but what a lot of people don’t know is that is also a greatly gifted poet.

Poetry started at his birth, he says. “My mother said that I came out of the womb with a quill in my hand, and that I wrote a poem on my birth certificate”; how could such a person not become an immense source of talent? And how could he not be attracted to poetry when “the sex, drugs and rock ‘n’ roll” that are linked to it are of inevitable attraction”? Even though his inspiration to write comes, he says, entirely from “loan repayments”.

Though poetry was innate, he states his musical path was formed by the loss of a bet, one that lead to a hyper skilled multi-instrumental broader path. And yet, Henry states that his favourite instrument is the audience, because “they are the hardest instrument to play, but make a great sound if you know what you are doing. However, there is the risk that a lot of audiences end up playing the musician, and nobody wants that”.

Henry Baroche & the Black Widows is his latest music venture, and he describes it as an explosive, eclectic affair. He has promised us something before the end of this hellish year with a whole lot more to follow in 2021.

From Southampton to Bristol

Sadly, Southampton has lost prodigious Henry to Bristol, which he describes as an “old antique sofa, cultured, full of memories, a bit of lost slave trade money down the back, stitched with materials from all over the world, now a bit frayed and ragged ‘round the edges, and being slowly moved from Hipsterville up to Gentrification Row”; on the other hand “Southampton is a chair that keeps being moved around the same room, with differing opinions on where it should be. Is it even a chair?”.

Before Henry moved to Bristol, he was a regular presence in the local poetry open mic scene: Write a Note and Moving Voices in Southampton and Poetry Platform in Winchester. As for Bristol, Henry has attended some, but states he was “asked never to come back”. Which simply means that we can proudly claim him as ours, as here he actively engaged in cultural life as a poet, as well as a musician in poetry open mics (and far more). 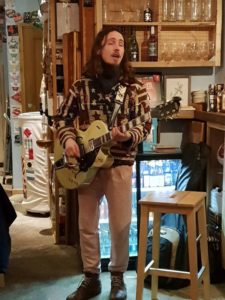 John Cooper Clarke is Henry’s favourite poet. He finds him more of an enigma than a poet though, “somewhere between a vaudeville comedian and a 19th century French revolutionary who dresses like Blonde On Blonde-era Dylan”. Because John Cooper Clarke started his career in strip clubs in the 70s, Henry says that he is most comfortable at his shows when he is completely naked.  Charles Bukowski is another of his favourite poets, and ‘The Laughing Heart’, which he knows by heart, is his favourite poem.

When it comes to musicians, Henry loves those who push the boundaries, such as : Bowie, Waits, Cave, Dylan, Annie Clarke of St. Vincent, Brittany Howard, Nina Simone, IDLES, Ian Dury, and on and on.  As well as Billie Eilish, “I have a song called ‘Bad Guy’ too”.

Henry loves music and surely has many memorable experiences at gigs, but his most memorable one was of almost dying at Blissfields festival in 2017, “All I’ll say is that you should never underestimate the gap between the stage and the barrier”.

Lockdown has been cruel on all creative souls, however Henry says he has managed to cultivate a level of moderate insanity that has been allowing him to be very creative and productive, whilst always ensuring that the 2m distance is maintained. Another of his lockdown adventures was that he broke his ankle when protecting a small child from a charging bull in the countryside, on a socially-distanced walk, “you know, keeping busy”. It would certainly take more than a broken ankle to stop his amazingly creative mind; and despite this aura of mystery, those who know him well, also know he has a magnanimous soul, full of charisma and kindness.

“’Monkey Mouth’ is a poem written almost entirely in prison lingo. I have spent a bit of time in prison, and when I was inside, I couldn’t understand a word anyone was saying. So I thought I’d take a few lessons,” says Henry.

I remember when being middle-class was…

“’I remember when being middle-class was…’ is a hopeful series of comments on how the system by which the UK is run may still change, but those clothes are hard to take off if they are confused with the very skin you’re born with,” says Henry.

I remember when being middle-class mattered
Now it’s scattered

I remember when being middle-class was
Paddington Bear, Ginger Ale and Radio 4
Now it’s something that no-one really knows what it’s for
Anymore

“’WHAT IS HAPPENING’ is a lyrical reflection on the past few years. Or it could just be the past week. So much is happening,” says Henry.

What is happening, does anybody know?
All of that money, where does it all go?
Far from maddening the people in the road
They say it’s funny to watch it all go

What is happening, does anybody know?
All of that promise, where does it all go?
Far from maddening the people in the road
They say that we must just watch it all go