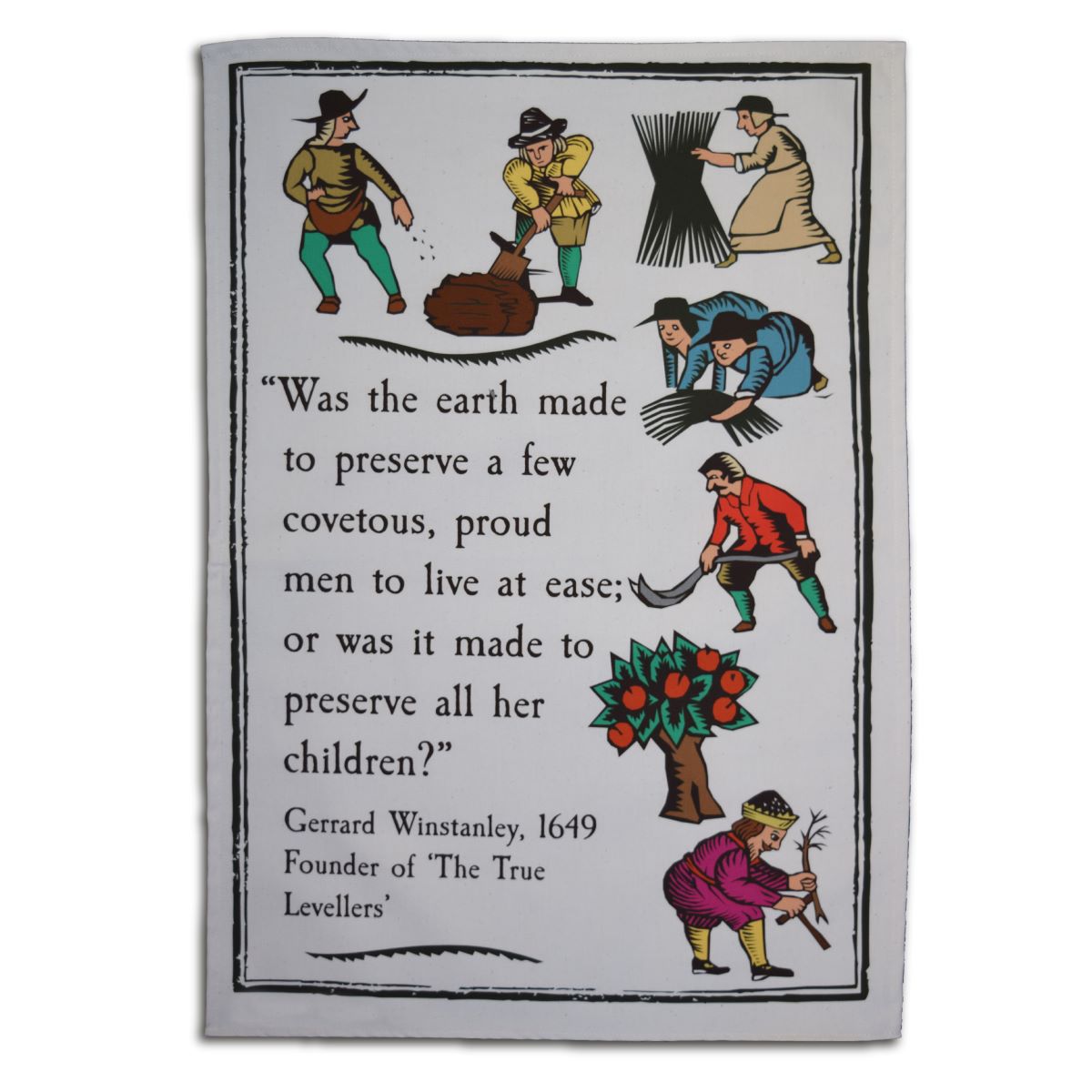 In life you often start in one direction and end up going in another. I was researching the history of radicalism in our region (Southampton) with a view to writing an article for In Common. I started off looking into the Independent Labour Party and ended up finding out about the history of the tea towel!

People have always had a need to express themselves. The Senegalese are a very polite society where you don’t say what you think directly to another. So instead, they express their thoughts on the government through political graffiti in public places. Here it became entwined with our desire for a good cuppa and a natter.

By the early 18th century tea towels were gracing the ‘upper class’ tables of the land. Made of linen, a fibre derived from the flax of linseed plants, the soft texture of the fabric made them ideal for drying the expensive bone china being produced by Wedgewood and others in the Potteries area around Stoke. It was wrapped around the teapot to keep it warm, used to prevent drips or gracefully draped over tea cakes to keep them fresh. Society ladies would embroider the towels, creating beautiful heirlooms to be passed down through the generations.

With the Industrial Revolution of the late 1700’s the cotton tea towel became a mass-produced item. They were produced in what were described by William Blake in 1804 as “the dark, Satanic mills” of Lancashire and Yorkshire where working conditions were often appalling. In an age when the majority could not read or write, pictorial and sometimes radical messages could be put on tea towels which would find their way into many homes.

In the early 20th century, poor American housewives would often reuse rough cotton animal feed sacks and cut them up into dish towels. However, they often embroidered them with intricate patterns, despite the difficulty of working with the coarse weave of the sacks.

The tea towel became the canvas on which we paint our life and our interests. Literally, in the case of painter Van Gogh. Late in his career, the impoverished genius often ran out of conventional canvas. Waiting for his brother, Theo, to send more, he painted on whatever came to hand. A still life with flowers by Van Gogh, painted on a tea towel, fetched £2.1m at auction in 2000.

Today they often contain images such as of  pets or holiday destinations. However, for nearly ten years, the family run Radical Tea Towel business has been keeping the campaigning tradition alive. In addition to towels it produces items such as calendars, cards, wash bags and face masks. All with designs such as Votes for Women or Unity is Strength.

Now back to what I was supposed to be writing about!