It’s Christmas time, and on Saturday (December 11) Southampton’s own travelling Santa is dropping into the Cricketers on Bedford Place bearing gifts. Well, not exactly Santa themself – but Grant Sharkey. And the gifts? – a whole set of topical tunes, some great laughs, and this season’s new album Wolk Music.

Now that ‘Woke’ has come to mean anybody with a sense of justice, equality, compassion or humanity; concerned about the planet; didn’t support Brexit; wouldn’t vote Conservative ever or read a billionaire-owned rag; Grant Sharkey is a man whose time continues to come, and looking around it doesn’t seem as if he will be going out of fashion any time soon.

Wolk Music ranges over Putin and the Ukraine, Dominic Cummings, the Alt right, and misogyny, but its not as simple as that. Never a rant, his lyrics veer from almost simplistic chants – always good for a live show – to complex ideas, comparisons and juxtapositions that make his point. Take Master Bass – only a Sharkey tune could taunt believers in the master race, and challenge their virility through the fact that they can’t play bass, and would get their arses kicked by people who can.

A number of songs on Wolk Music take aim at masculinity (oh, so that’s how Putin fits in!) or rather: men.  But not though heavy oppositionist lyrics, instead the songs paint a picture of sad, pathetic, empty men looking for something they can cling on to. If you’ve heard his classic Racist Song, you’ll know what I mean.

The Cricketers gig is the last on his winter tour  – a gruelling schedule that  has taken in small venues across the country; repeat trips to entertain a dedicated audience with new material every few months. The routine includes a time to write and a time to record, on a mission to produce two albums a year for twenty years. Hence Wolk Music is 18/40. He went from Southampton scene favourites Toupe with three men and two basses to one man and a standup bass, which he sometimes set aside for a ukulele and a stomp board.  The fact that he is still on track and vaguely solvent is down to sheer hard work, endless ideas, two tours a year and a loyal and growing fan-base across the country. 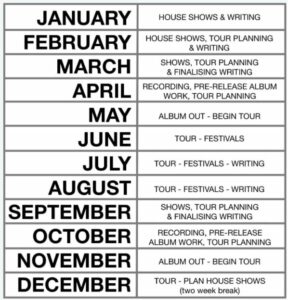 But he isn’t just a one-man band. He is Britain’s leading late-night takeaway onion bhaji reviewer too. His latest book “The wrong side of the Wye” unsurprisingly subtitled An English Farce, is one of the first post-Brexit fictions, and probably a better Christmas read than MP Mark Francois’s recent memoirs of fighting for Brexit in the trenches. Sharkey already has Brexit form, taking on Mr Wetherspoons in a somewhat challenging interview. His novel imagines it’s 2046 and Wales is just about to depart the UK – or rather separate from England as the others have already  left long before.

If you can get along to the Cricketers on Saturday, then do. His gigs are a treat, although if you miss it, he will be round again shortly with a new set of songs and targets for his tongue.

Grant Sharkey is the modern equivalent of a travelling troubadour, who used to carry their topical songs music around the country. It’s probably too much to talk Woodie Guthrie or Phil Ochs. But centuries ago, Europe’s troubadours used to travel over from France. Every year, the Mayor of Southampton would present a medal to their favourite – probably even invite them to sing in their parlour. Sources tell me that Grant once got the call, though not the medal – but that’s another story.

You can check out all Grant Sharkey’s merchandise, and order Wolk Music through grantsharkey.bandcamp.com/music ,

Life’s not easy for a travelling musician, but if you want to support Grant Sharkey’s work, he runs a Patreon scheme   patreon.com/grantsharkey