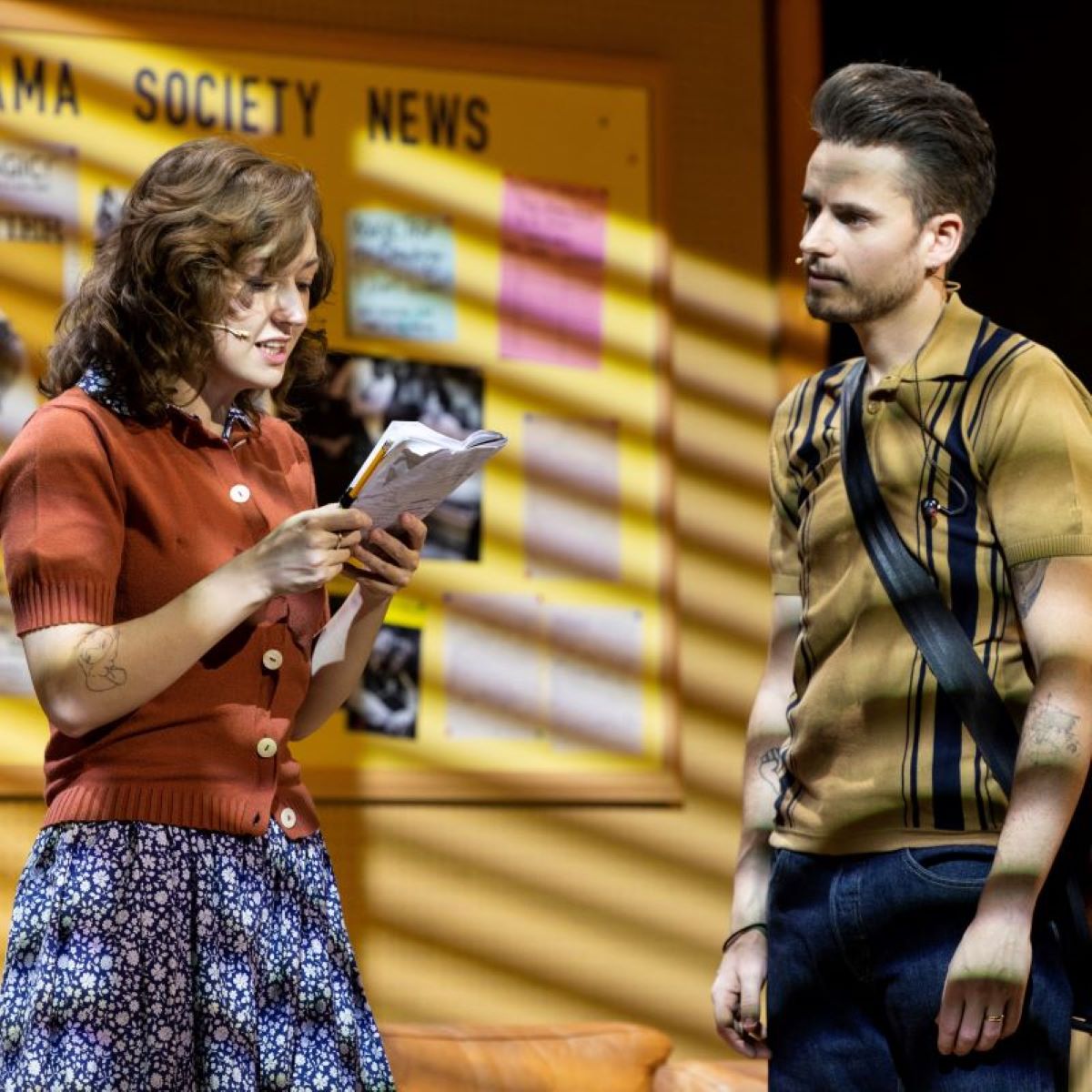 Hail to King! Beautiful – the Carole King Musical, is an absolute must-see. It won Tony awards in New York in 2014 and Olivier awards in London in 2015.

It also  wins this reviewers award for the most outstanding musical of its time and for providing pure theatre joy. It received a deserved standing ovation from the first night audience last night (12 April). The multi-talented cast can play instruments, sing and dance and put boundless energy into the show.

The plot explores the turbulent marriage of the young Carole King to Gerry Goffin, much of which was channelled into producing classic songs covered by acts such as Aretha Franklin, the Beatles, the Drifters and Kylie Minogue.

This is not just another thrown together jukebox musical with a thin plot linking hit songs. Where this show stands out from a busy field is that the musical numbers are germane to the plot, giving insight into King’s emotional state. Well-known songs are given their  genesis story and extra layers of meaning.This especially applies to Goffin’s lyrics to Up On the Roof which was the only place he felt safe as a child.

The teenage King meets music industry mogul Don Kirshner, is introduced to lyricist Gerry Goffin, they fall in love and they craft exquisite pop songs at a time when the charts were full of yakety-yak, stupid cupids and splish-splashing on a Saturday night.

On the other side of Goffin and King’s cubicle in Kirshner’s hit factory is another songwriting couple, Cynthia Weil and Barry Mann, and the show captures their friendly rivalry. Carole King and Cynthia Weil were two young women succeeding in a man’s world by writing No.1 hits.

In the early ’60s Don Kirshner’s music factory at the Brill Building at 1650 Broadway, produced numerous hits such as It Might as Well Rain Until September,Will You Love Me Tomorrow, Take Good Care of My Baby, The Loco-Motion, You’ve Lost That Lovin’ Feeling, We Gotta Get Out of This Place and A Natural Woman.

Carole King was 17 and pregnant when she married the 20 year old lyricist Gerry Goffin, the master of telling a complicated story in simple terms often from a female perspective.

His mental state deteriorated and they divorced in 1968.  Carole then had to write her own lyrics and found solo mega stardom with the recording of 1971’s Tapestry which sold 25 million copies.

Seren Sandham-Davies is a brassy Cynthia and Jos Slovick’s hypochondriacal Barry is humorous.

The whole seamless show is superbly choreographed by Leah Hill.

You will go home thoroughly uplifted by Beautiful – The Carole King Musical and its brilliant cast. Never mind “One Fine Day”, this show is one fine evening at the theatre.

Molly-Grace Cutler is spectacularly good as Carole King. Not only does she have a terrific voice but she lives the character. At times it’s hard to believe that you are not listening to the real King singing. By the time you get to hear her perform (You Make Me Feel Like) A Natural Woman, you’re so emotionally entranced that the result is electrifying.

Contrary to one of her classics It’s too Late, it’s certainly not too late to get your tickets. If you do, you will leave the show thinking “I never knew she wrote that!”