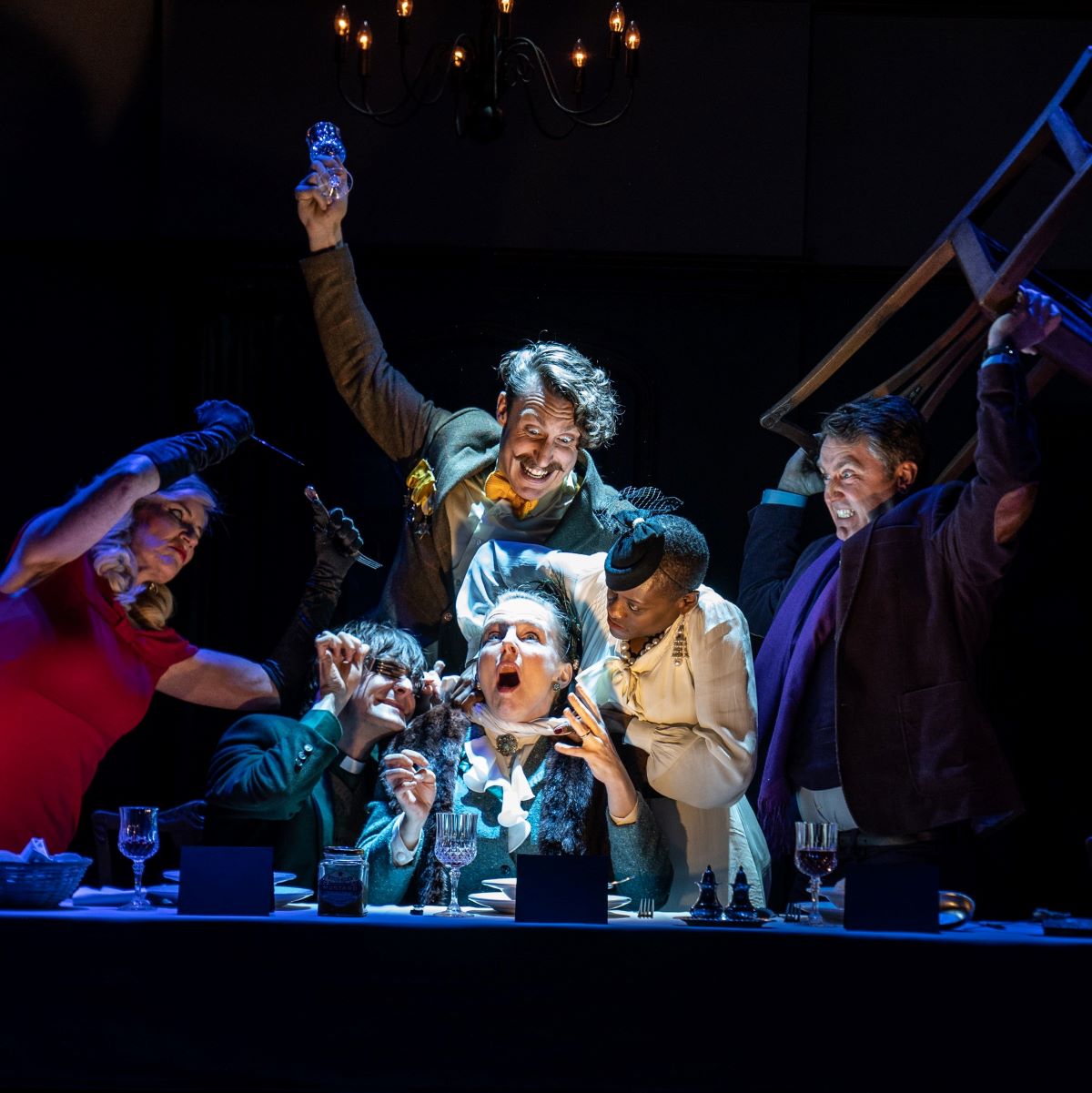 Was it Miss Scarlet, with the revolver in the dining room, or was it Professor Plum, with the lead pipe in the library?

Based on the classic detective board game and the hit 1985 film Clue, the brand new stage play of Cluedo is at the Mayflower, Southampton, this week.

This UK premier production of Cluedo is directed by Mark Bell, director of the award-winning The Play That Goes Wrong. Before the drama kicks off, a light music programme on the wireless features the songs, “Murder, he says” by Dinah Shore and Bing Crosby’s “Pistol Packin’ Mama” to evoke the popular culture of the 1940’s.

When Miss Scarlett, Professor Plum, Mrs Peacock, Revered Green, Mrs. White and Colonel Mustard all arrive at a country house one dark and stormy evening, they are concerned to find they have all received the same mysterious invitation from Lord Boddy. What’s clear is that they all have something to hide and the mystery and hysteria grows, as the inhabitants and guests of Boddy Manor start being killed, with a variety of familiar weapons, leaving everyone to wonder, who will be next!

This hilarious spoof of a thriller will keep you guessing as both the audience and actors onstage try to work out whodunnit … with what … and where!  Every element of the production hits the mark. David Farley’s set is nothing short of ingenious, as rooms appear, distant doors connect and there’s no doubt at all that you’re right inside the Cluedo mansion.

While Michelle Collins (Miss Scarlett) gets top billing, she’s one great part of a truly excellent ensemble of equals.  Special mention, however, must go to Jean-Luke Worrell who plays Wadsworth the Butler and is a wonderful Master of Ceremonies.

Mrs Peacock (Judith Amsenga), Yvette (Laura Kirman) and Mrs White (Etisyai Philip) are all comedy goddesses, rounding out their respective roles with energy and wit. Meg Travers and Harry Bradley complete the ensemble in a range of roles (a brilliant ‘Mr Body’ and wonderful Cook).

The stage set is brilliantly designed to match the layout of the Cluedo Mansion. The spacious Entrance Hall is surrounded by seven doors which open up to reveal the Lounge, Study, Library, Kitchen and Conservatory as well as hidden passageways for a speedy escape.

In between the amateur sleuthing, the script is peppered with silly jokes – “a husband should be like Kleenex  – soft, strong and disposable!.”  There are topical comments too, such as when Reverend Green claims that he can’t possibly be involved in corruption – he is a Conservative!

What we have is a sparkling comedy that rockets along between indiscretions and the more than occasional murder.  This is good, clean, old fashioned entertainment for all ages, from 9 – 90. If you want a classic, fun, silly and carefree night at the theatre, you must catch Cluedo this week. It’s tight, funny and represents the best of theatrical comedy.