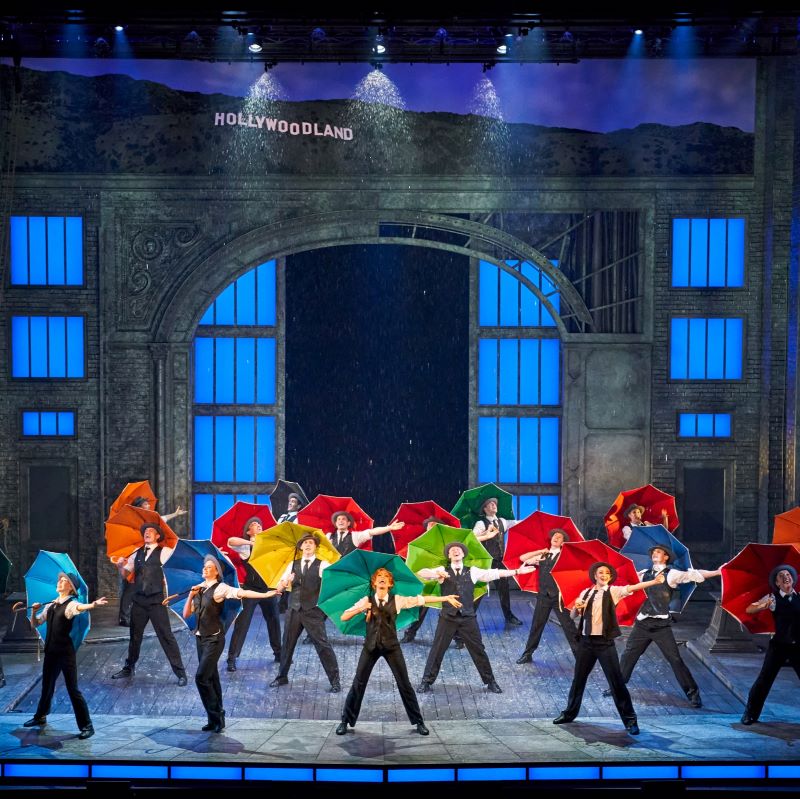 SINGIN’ IN THE RAIN, WHAT A GLORIOUS FEELING!

In a 2012 poll of film critics, Singin’ in the Rain was voted as the best film of the 20th century. This 5* feel good production at the Mayflower is probably the best show you will see there this or any year. Splash out and see this life affirming show.

Not a duff note, a missed step or a fluffed line as everything was flawless from start to finish. It was also heart warming to see such an all-age audience enjoying the show, it truly crosses the generations.

The story revolves around the Hollywood transformation from silent movies to the new exciting world of ‘the talkies’ in the late 1920’s.  Silent movie star Lina Lamont has the glamorous looks that fit, but her high-pitched, mangled vowels and strangled singing voice (all performed with wonderful comedic timing by Jenny Gayner) require dubbing by her on screen partner Don Lockwood’s love interest, Kathy Seldon. Charlotte Gooch as Kathy gives an extremely impressive performance as the up-and-coming actor who agrees to lend her talking and singing voice in order to stop the new Lockwood and Lamont film becoming a Hollywood disaster.

Indeed, it’s hard to imagine better casting for these roles made famous in the original 1952 film by Gene Kelly, Debbie Reynolds and Donald O’Connor.

An overwhelming warmth pours off the stage from these three and their superb supporting cast.

The physical demands of performing this stunning musical live on stage are immense, yet the exemplary performances given by the whole cast appear effortless.

The closing number of the first half that steals the show. The excitement in the audience is palpable as the first drops of water begin to fall on the stage for Sam Lip’s rendition of the title track, ‘Singin’ in the Rain’. His joy at performing this number is infectious, as he happily kicks and splashes water into the entranced audience. Those on the first couple of rows may have been wishing they had brought umbrellas of their own! Credit must also be given to the hardworking production team – 14,000 litres of water per show is a lot of mopping!

Act 2 is a whirlwind of colour, costumes and complicated dance steps, which make it impossible to tear your eyes away from ‘Broadway Melody’.

Jonathan Church’s critically acclaimed production of Singing In The Rain is simply glorious. The show is also a celebration of the incredible talent we have in today’s British Theatre.

Andrew Wright’s high-energy choreography and Simon Higlett’s sumptuous set design, combine with the charm, romance and wit of one of the world’s best- loved movies to make this a must see show. You will be singing all the way home!