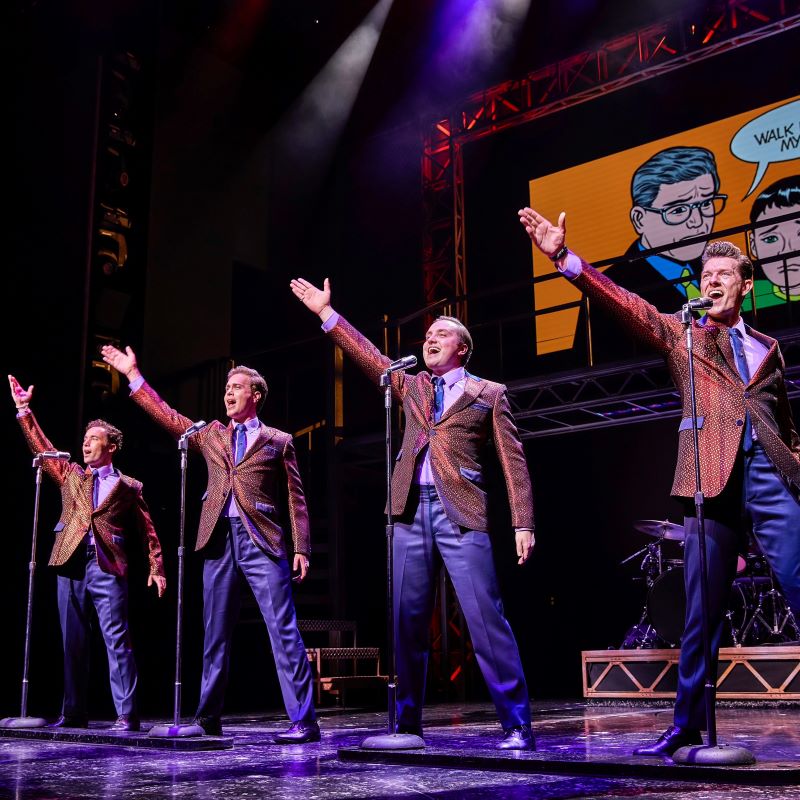 Oh What a Night!

It may not have been late December back in ’63, but it felt like it could be as the audience were transported back to the ‘60s and ‘70s with a series of toe-tapping songs by Frankie Valli and the Four Seasons, as Jersey Boys opened at the Mayflower Theatre last night (June 6).

I’m going to admit I’d never seen Jersey Boys, but I knew the songs – as, like many, I’d grown up with my parents playing their hit records. I didn’t realise quite how many there were though.

The show tells the band’s own story, and as each member directly addresses the audience, we find life wasn’t always easy for them. Success was interspersed with mob connections, debt, family problems, and prison, which ultimately led to their break up.

Tommy De Vito, who was played by Dalton Wood, is the Jersey boy cliché always on the lookout for a quick buck, Bob Gaudio, played by the likeable Dougie Carter, as the clean-cut kid with a talent for songwriting, and Nick Massi, played by Norton James, as a man who irons his shirts twice due to the time he spent in the prison laundry.

All of them play their parts well, and the engagement when they address the audience to tell the story works really well in the straightforward scaffold-style set.

The range of his vocals was obvious from the first few songs, and when he sang Can’t Take My Eyes Off You, the hairs on the back of my neck stood up. He is truly outstanding and I’d love to see him on stage with Frankie himself!