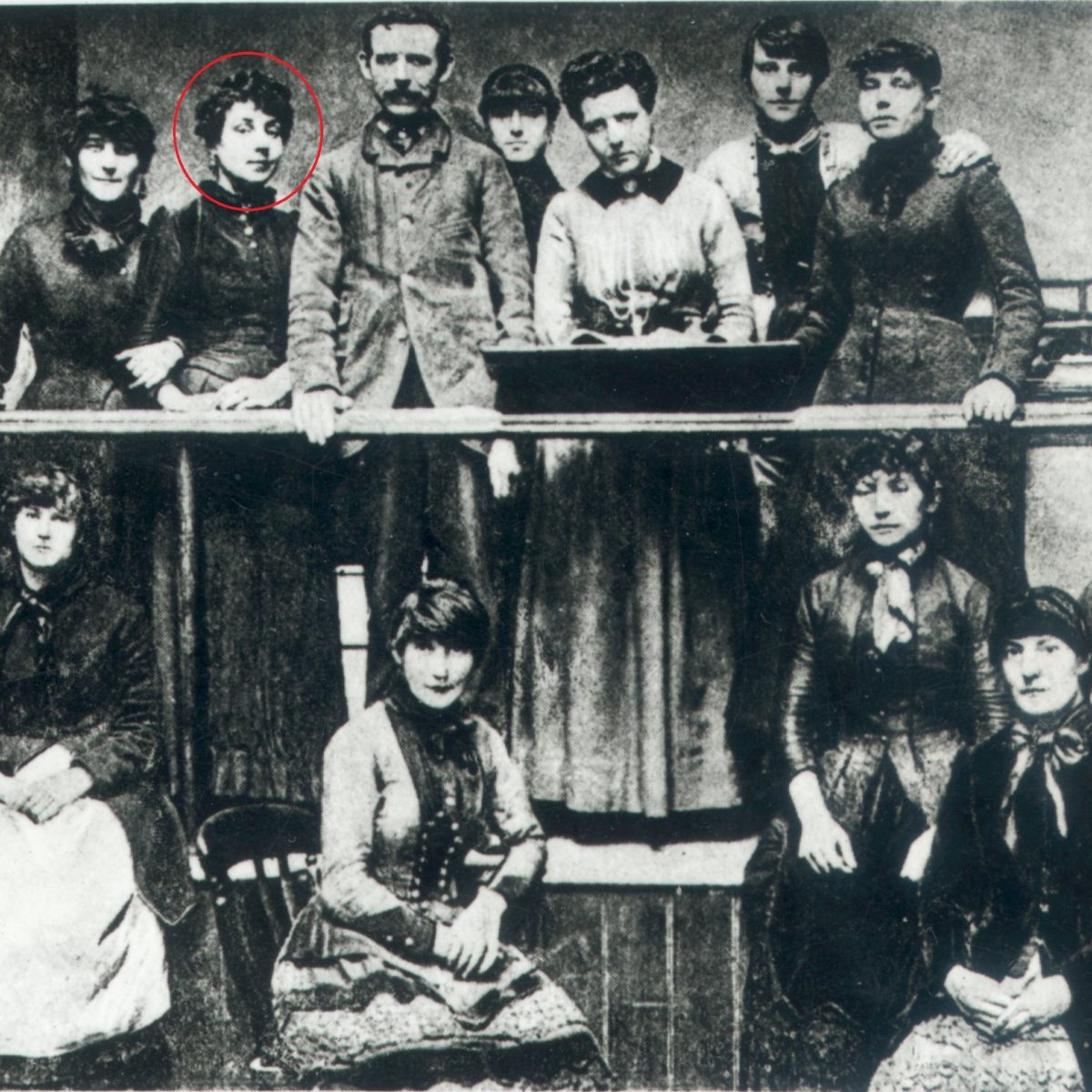 The female sewing machinists’ strike of 1968 at the Ford Dagenham plant resulted in the passing of the Equal Pay Act 1970. Their story was told in the 2010 film Made in Dagenham. Eighty years before, in London’s East End, the female workers at the Bryant & May match factory had a successful strike in 1888 that was equally significant. It was the first strike by unorganized workers to gain national publicity and helped inspire the formation of unions all over the country.

Their story was told in the 1966 Match Girls musical play based on a book by socialist actor Bill Owen, best remembered for his role as Compo in Last of the Summer Wine. The central character of the musical is ‘Kate’, a factory worker, who writes to famous writer and activist Annie Besant to ask for help. The story follows Kate and Annie’s attempts to rally the girls, leading Kate to become a fearless strike leader.

Two members of the eight woman Strike Committee, Sarah Chapman and Kate Sclater, have local links. Sarah was born in the East End and remained there all her life, Kate was born in Southampton and is buried in Essex.

Sarah Dearman, then known as Sarah Chapman, was one of the main organisers of the 1888 strike in which 1,400 workers walked out. Sarah became a key member of the Matchmakers Union and died in 1945, aged 83. Samantha Johnson, her great granddaughter, lives in Highfield, Southampton. Samantha and her husband Graham only found her unmarked public grave in 2017. It is now under threat of ‘mounding’ which involves the removal of  old graves, the addition of more soil on top, and the digging of new ones.

A petition with almost 9,000 supporters has been launched by the family and can be found at change.org/p/minister-of-justice-save-sarah-chapman-s-grave-a-leader-of-the-1888-matchgirls-strike-trade-union-heroine.

Graham Johnson says “We are promoting memorials in the East End to all the Matchgirls, and hope we can get a plaque to Kate Sclater in Southampton.”

Kate and her family moved to London between May 1873 when her brother, Alfred, had been baptised in Southampton, and October 1874, when there was the birth in Bromley of another brother, James Joseph.

When Robert Mitchell wrote his 1940 play ‘The Match Girls’ (an earlier version of the 1966 production) for the Unity Theatre, his research included speaking to survivors of the Strike, so possibly Kate Sclater was the inspiration for his lead character, Kate. EastEnders fans may remember a character called Kat Slater, however the show’s production team say the character was not named after Kate Sclater.

The Matchgirls Memorial website blog on Kate mentions well known Sclaters who were famous zoologists and ornithologists whose descendants live In Hampshire. Kate is buried in Ilford, Essex and the Johnsons are currently trying to find her grave. Sarah is buried in Manor Park Cemetery, Forest Gate.

There are two other local connections – Jane Addams, the Chicago social reformer and Nobel Peace Prizewinner, visited the East End in 1888 and went to Matchgirl meetings. She sailed into, and out of, Southampton. WT Stead, who, as editor of the Pall Mall Gazette, gave huge support to the Strike, went down with the Titanic which left Southampton on 10 April 1912.

A road in Shoreditch is called Sclater Street. At its junction with Brick Lane, there is a plaque that says ‘Sclater Street 1798’ and it was London’s foremost bird market. It is thought that the French Huguenots, some of whom had settled in Southampton,  introduced the custom of keeping canaries and singing birds. A final connection is Philip Lutley Sclater from Hampshire, an expert ornithologist, who gave his collection to the British Museum in 1886.

Who were Bryant & May?

The match-making company was formed in 1843 by two Quakers, William Bryant and Francis May. In 1850 they entered into a relationship with the Swedish matchmaker Johan Edvard Lundström to capture part of the market of the 250 million matches used in Britain each day. Company dividends were paid of 20 per cent in 1886 and 1887. In the 1880s Bryant & May employed nearly 5,000 people, most of them female and Irish, or of Irish descent.

The matchboxes were made through domestic outwork under a ‘sweating’ system. Such a system was preferred because the workers were not covered under the Factory Acts. The women and girls involved in boxing up the matches had to pay the boys who brought them the frames from the drying ovens and had to supply their own glue and brushes.

It is thought that the Bryant & May management were aware of phossy jaw, a form of bone cancer, in their factory. If a worker complained of having a toothache, they were told to have the teeth removed immediately or be sacked. The white phosphorus that they used to make the matches caused yellowing of the skin, hair loss and phossy jaw, caused by inhalation of phosphorus vapour. The whole side of the face turned green and then black, discharging pus. Death occurred in around 20 percent of cases. Although white phosphorus was banned in Sweden and the USA, the British government refused to follow their example. The condition is not associated with red phosphorus.

Annie Besant (1847-1933) was a socialist, a women’s rights activist, prolific author, brilliant public speaker and lifelong campaigner. She was also involved in the 1889 London Dock Strike in their struggle for the “Dockers’ Tanner”. Like the match-girls, the dockers won public support for their struggle, and both strikes were won.

In 1887 Annie Besant joined forces with William Stead to establish the campaigning weekly newspaper, The Link . It carried on its front page a quotation from Victor Hugo:

Annie was horrified when she heard about the pay and conditions of the women working at the Bryant & May match factory and interviewed some of the workers. She discovered that the women worked fourteen hours a day for a wage of less than five shillings a week. However, they did not always receive their full wage because of a system of fines, ranging up to one shilling. Offences included dropping matches or going to the toilet without permission.

On 23rd June 1888, Besant wrote an expose article in The Link entitled ‘White Slavery in London’. The Bow Street factory, which had opened in 1861, she called a “prison house”. Bryant and May threatened to sue Annie Besant for libel and attempted to force their workers to sign a statement that they were happy with their working conditions. When some refused, the organisers were sacked and 1,400 of the workers at Bryant & May went on strike.

The Press became interested – both the Pall Mall Gazette and The Star newspapers provided positive publicity. Supportive letters were published in The Times. On the 10 July, Annie Besant took 56 girls and women to the House of Commons, where a deputation of 12 went in to meet with two sympathetic MPs. More than 700 girls, boys, men and women signed the Strike Register.

The girls wrote a letter to Annie Besant, which was published in The Link on 14 July:

“My Dear Lady, – we thank you very much for the kind interest you have taken in us poor girls…… Dear lady, you need not trouble yourself about the letter I read in the Link …. because you have spoken the truth, and we are very pleased to read it. Dear lady, they are trying to get the poor girls to say that it is all lies that has been printed, and trying to make them sign papers to say it is lies; dear lady, no one knows what we have to put up with, and we will not sign them. We all thank you very much for the kindness you have shown to us…….with kind friends’ wishes for you, dear lady, for the kind love you have shown us poor girls. Dear lady do not mention the date this letter was written or I might have put my or our names, but we are frightened, do keep that as a secret.”

On 16 July the London Trades Council met with the Bryant & May Directors to discuss the Matchgirls demands. The following day, the London Trades Council and the Strike Committee met with the Bryant & May Directors. ALL the demands were met and terms agreed in principle including that all fines should be abolished. It was also agreed that a Union could be formed and barrows would be provided to carry boxes, rather than the previous practice of young girls having to carry them on their heads. The women approved, with  “wild cheering”. The inaugural meeting of  The Union of Women Match Makers took place on 4 August with the enrolment of 468 members.

Sarah Chapman and Kate Sclater were part of the 12 strong Union Committee. The Union soon changed its name to The Matchmaker’s Union open to male and female members.

Sarah Chapman was the first elected TUC representative from the Matchmakers’ Union. In 1890 she went to the International TUC meeting in Liverpool, one of only ten women among 500 delegates. Campaigner for Votes for Women, Emmeline Pankhurst, became involved in the strike and wrote:

“I threw myself into this strike with enthusiasm, working with the girls and with some women of prominence, amongst these the celebrated Mrs Annie Besant… It was a time of tremendous unrest, of labour agitations, of strikes and lockouts…..a most stupid reactionary spirit seemed to take possession of the Government and the authorities.”

In 1891 the William Booth and his Salvation Army opened its own ‘model’ match-factory in Old Ford, East London using harmless red phosphorus and producing six million boxes a year. The Salvation Army paid their employees twice the wages of Bryant and May.

Facing bad publicity Gilbert Bartholomew, MD of Bryant & May, announced in 1901 it had stopped using the dangerous phosphorus. In 1908 the House of Commons passed an Act prohibiting the use of white phosphorus in matches. Henry Snell (1865-1944), a 1930s Labour party leader in the House of Lords, wrote: “The Matchgirls’ strike had an influence upon the minds of the workers which entitles it to be regarded as one of the most important events in the history of labour organisation in any country.”

An event to commemorate the 125th anniversary was held in Bishopsgate, London in 2013. The Matchgirls also featured in an episode in the second series of the BBC’s Ripper Street, aired on 11 November 2013, with victims of the conditions in the factories seeking revenge. The Matchgirls were also featured during the “HerStory” video tribute to notable women on U2’s tour in 2017.