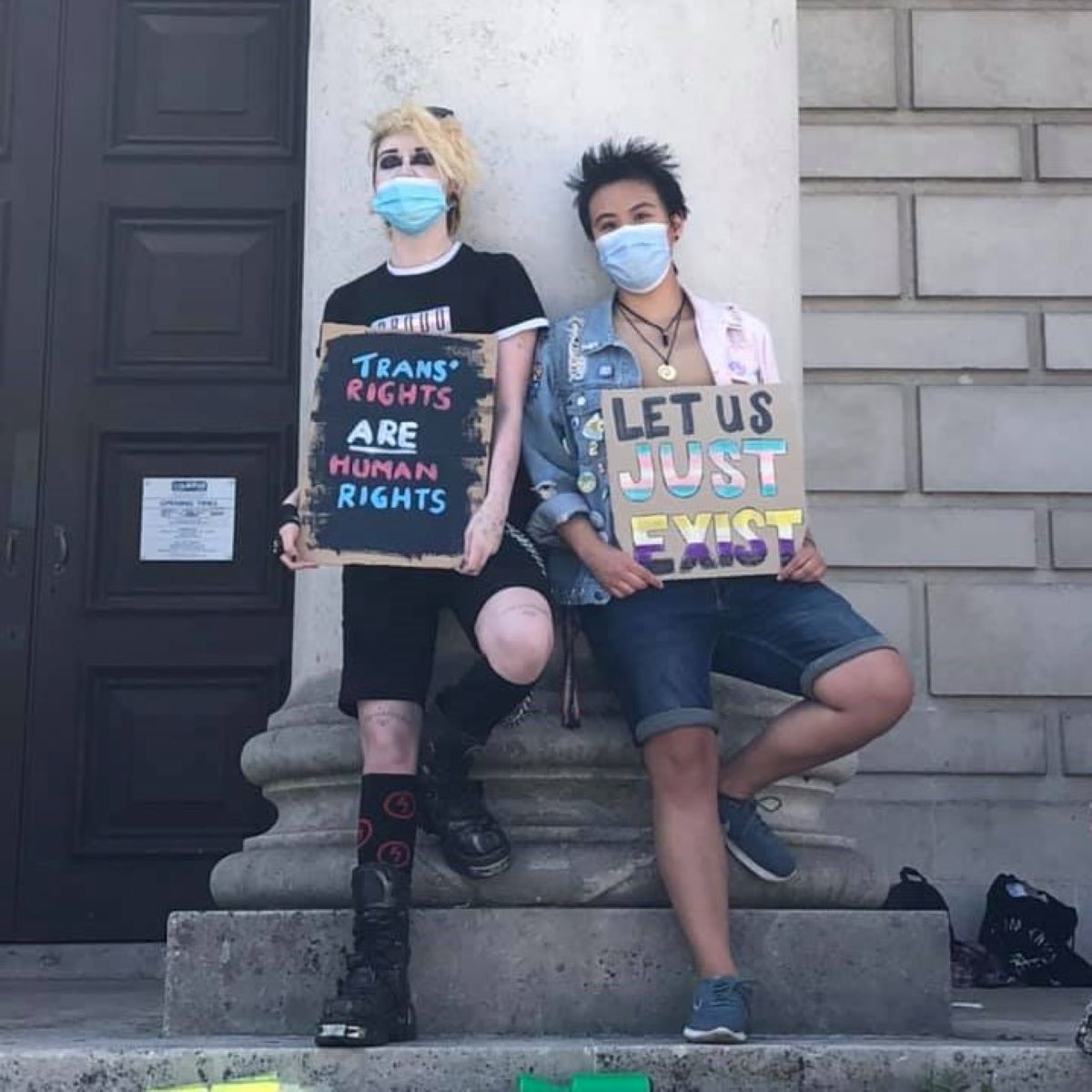 As a transmasculine academic, I’ve found it painful and frustrating to read the discussions – both in the mainstream media and on social media – that represent ‘trans rights’ as incompatible with ‘women’s rights’. Nowhere has this been more clearly illustrated than in a recent essay by the bestselling author J. K. Rowling expressing her concerns about trans activism, and the response from trans people and allies – including several actors who starred in Harry Potter movies. In turning on the trans community, are a minority of self-styled feminists being misled by a patriarchal ‘divide-and-conquer’ strategy? And in constantly being forced to justify our very existence, in the face of assaults from women’s rights groups as well as right-wing media and commentators, are we as trans activists being distracted from the root causes of transphobia – or are we just too emotionally exhausted to address them?

Trans people are often criticised for referring to anti-trans activists with the acronym ‘TERFs’, an abbreviation for ‘trans-exclusionary radical feminists’ – but this term is widely believed to have been coined by freelance writer Viv Smythe, a self-described cis-het (cisgender, i.e. not transgender, and heterosexual) woman and intersectional feminist. Meanwhile, some women’s rights activists persist in referring to trans women as ‘TIMs’ (‘trans-identified males’). To describe trans women as males is to obscure their suffering at the hands of the patriarchy; to insist that they have ‘male privilege’ is a fundamental misunderstanding of their life experiences as one of the most marginalised and oppressed groups in society.

While Ms Rowling’s comments were largely focused on the trans community, what prompted her to speak out about the importance of ‘safe spaces’ was her history of abuse at the hands of cisgender men – not trans women. Yet most, if not all, trans women also have a history of being abused by cis men – ranging from verbal harassment to being spat on, inappropriately touched, physically attacked, or in the worst cases raped or tortured. Around the world, cis men are responsible for the overwhelming majority of assault, rape and murder cases, whether the victims are cis women, trans women, trans men or non-binary people. Why, then, are cis feminists attacking the trans community instead of campaigning jointly against male violence?

The argument revolves around a set of complex philosophical, legal, political and ethical questions about how we collectively understand words like ‘men’ and ‘women’, ‘sex’ and ‘gender’, ‘safe’ and ‘unsafe’ spaces, and more.  For cis people, it is easy to treat these questions as purely academic: for us as trans people, they can be a matter of life and death.

These and other questions have risen to the surface in the UK with the ongoing debates around the Gender Recognition Act (GRA) reform, originally intended as a way of making it easier for trans people to change legal gender markers in official paperwork.  At present, we can only do this by providing two medical reports confirming a diagnosis of gender dysphoria, along with two years’ evidence of living full-time in our true gender (e.g. bank statements, utility bills or rental contracts), and submitting an application with a fee of £140 to a panel of ‘experts’ who make a judgement on the applicant’s gender without ever meeting them.  A diagnosis of dysphoria can only be issued by Gender Identity Clinics, where the average wait time is three to four years, or by a small list of named private consultants who charge high fees for their services.  Furthermore, there is still no provision for legal recognition of any gender other than ‘male’ or ‘female’, despite the fact that an estimated 30-50% of the trans community identify as non-binary.

The consultation on all these matters was first launched in 2018, but the Government is still procrastinating on issuing an official response, despite promising to do so on several occasions.  A leaked report suggested that while 70% of responses to the consultation on GRA reform were in favour of relaxing the rules to allow self-identification of gender without a dysphoria diagnosis, there was concern that these figures had been ‘skewed by an avalanche of responses from trans rights organisations’.  As the only people who would be directly impacted by the proposed reforms to the GRA are trans people who want to update their paperwork, it is curious that the Equalities Office would be surprised by a large majority of responses coming from trans rights organisations.

A likely explanation is that the Government was expecting a louder response from anti-trans activists, focusing not on concerns about trans women as such, but on concerns about cis men.  Specifically, some women’s rights groups have expressed a fear that if measures are put in place to make it easier for trans women to self-identify as women for legal purposes, these measures could be exploited by cis men.  Their fear is that cis men could claim to be trans women in order to gain access to women-only spaces, with a view to spying on vulnerable women and potentially carrying out acts of violence against them.

Research suggests otherwise.  In countries where gender self-identification has already been legalised, including Norway, Malta and the Republic of Ireland, no increase in attacks on women and girls in single-gender spaces has been reported since the law was introduced.  There is no evidence to support the widely repeated claims that that trans women pose a threat to cis women.  Likewise, allowing self-identified trans women to access women’s facilities does not increase the likelihood that men will falsely claim to be trans women, in order to assault women in these spaces.  It should be obvious from even a brief glance at crime statistics that abusive men have more than enough opportunities to assault women already, without feeling the need to impersonate trans women or claim to be trans.

The recent Netflix documentary Disclosure, a history of trans representation in films and television over more than 100 years, provides valuable insights into the origins of this bizarre narrative about cis men posing as women.  Until very recently, most cis people had never knowingly met a trans woman (or, indeed, a trans man or a non-binary person) in real life.  As such, their understanding of what it means to be transgender – or, to use the older term, ‘transsexual’ – was largely shaped by cis male actors playing the roles of trans women in films and TV shows.  Over several decades, popular movies such as Some Like It Hot, Mrs Doubtfire, Ace Ventura: Pet Detective, Police Academy and the Big Momma’s House trilogy also reinforced the idea of cis men wearing dresses, wigs and make-up, often specifically to hide their real identity (as spies or criminals!) and/or deceive people into allowing them access to women and children.  These misleading narratives are nearly all written by cis men.

Thanks to these movies, generations of cis people have grown up believing that being transgender is a choice; that is no difference between trans women and ‘men in dresses’; and that these people’s reason for dressing as they do is to conceal their true identity, rather than to reveal it.  Only recently have trans women begun to be featured in sensitive and well-written TV series like Pose (starring MJ Rodriguez, Indya Moore, Dominique Jackson and Angelica Ross, among others) that represent them not only as women, but as human beings in all their complexity, whose life stories can’t be reduced to ‘gender issues’ alone.  The impact of seeing these actresses living their lives as women, off-screen as well as on-screen, may finally start to shift public perceptions of what being a transgender person actually entails.  Widespread recognition of trans women as women, trans men as men and non-binary people as a valid category of human beings, separate from ‘male’ and ‘female’, would completely shift the nature of the conversation around women’s safety.

How does the entertainment industry need to change in order for it to stop perpetuating dangerous stereotypes about trans people, which fuel fear and encourage anti-trans hate crime?

How can schools educate students more effectively about the complexities of sex and gender, moving beyond the simplistic ‘XX=girl, XY=boy’, while promoting a culture of non-violent communication and respect towards people of any gender or none?

How can public toilets, changing rooms and other facilities be redesigned to make sure that everyone who wants to use an individual cubicle, lockable from the inside, can access one – just as they do in their own homes?

And, perhaps most importantly of all: What measures need to be put in place to prevent violence and make communities safer for everyone?