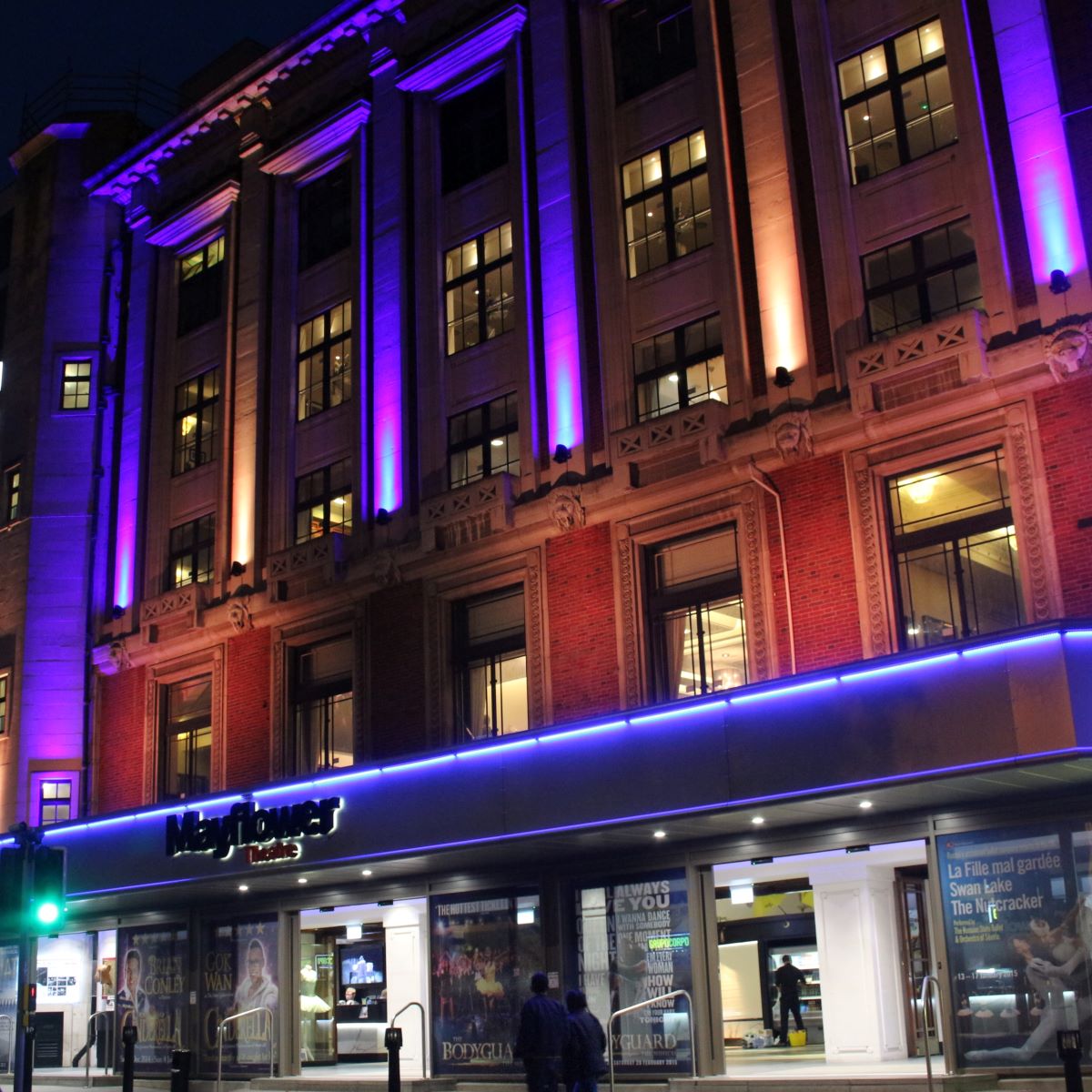 Did you know that the Mayflower, built in 1928, has one of the largest auditoriums in England with more than 2,300 seats and used to have a tea garden on the roof!

In the late 1920s the Moss Empire theatre group built six 2,000 seater venues, including Southampton. The style used was ‘neo-Grecian’ with shades of Art Deco. Built on shallow foundations because the land was barely above water level, the stalls are on the natural slope of the land. The location near the station was convenient as touring productions came by train.

However, when the Empire Theatre, Southampton opened in December 1928 with a new play ‘Winona’, ’talkies’ had just replaced silent cinema and they were what audiences wanted. In 1930, the famous ballet dancer Anna Pavlova performed. For a week from Boxing Day that year, Gracie Fields appeared. She was the most popular entertainer of the day. However, the theatre was going to have to welcome the cinema and on 14 May 1933, the first film was shown. Mixing cinema with occasional live entertainment such as The Crazy Gang or the Tiller Girls proved a success.

At the start of WW2 in September 1939, the Government initially ordered the closure of all places of entertainment. When the feared massive bombing casualties did not materialise, they reopened and became an essential part of morale boosting. The theatre sustained some damage in the Southampton blitz in 1940.

In 1945, Ted and Barbara Andrews introduced their ten year old daughter Julie Andrews to the stage. She stood on a box to join her father at the microphone. Large scale shows did not resume until 1950 when the name was changed to The Gaumont. In 1952 entertainment included the Sadlers Wells Ballet Company with Margot Fonteyn, comic Max Miller and the comedy double act Laurel and Hardy. 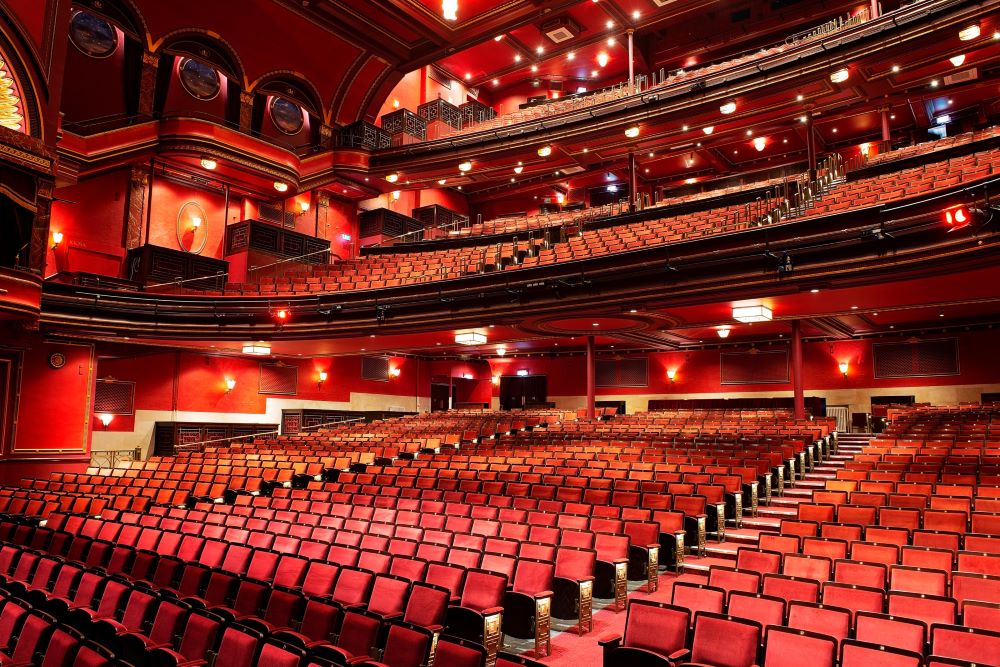 At the peak of movie going in 1955, there were 19 cinemas in Southampton but soon cinema audiences like those of live theatre decades earlier began to decline. Then rock’n’  roll started and the Gaumont was part of the Rank organisation’s touring circuit. Bill Haley And The Comets of ‘Rock Around The Clock’ fame came in February 1957 with three performances in one night. Buddy Holly and the Crickets appeared in March 1958. Gene Vincent, Eddie Cochran and Chuck Berry were also some of the many American acts to wow audiences.

The Beatles first appeared on 20 May 1963.They began the tour supporting Roy Orbison but ended it at the top of the bill. The Fab Four returned on 13 December of the same year. The Rolling Stones visited four years running starting on 29 September 1963. The Stones made their last visit on 9 October 1966 topping a bill that also featured Ike and Tina Turner. The Jimi Hendrix Experience, Cat Stevens and the Walker Brothers shared the same bill on 12 April 1967. Queen appeared on 14 November 1974, on 4 November 1975 and finally on 26 and 27 May 1977.

In the sixties, pantomime gave way to Christmas Shows starring some of the most popular entertainers of the day including Ken Dodd, Dick Emery and Lulu. The Roy Castle Christmas Show played for three weeks from Christmas Eve 1975, as did Jimmy Tarbuck in 1979.

The big music names continued in the eighties with Duran Duran (1 July 1981), Ultravox (29 and 30 May 1984), Thin Lizzie and the heavy metal of Black Sabbath featuring Ozzy Osbourne (1 May and 25 June 1980) and Iron Maiden (7 May 1983 and 5 October 1984). The great comedians of the day also toured regularly with Morecambe And Wise and The Two Ronnies as two high points.

In 1982, the Rank Organisation found they were losing money and submitted a proposal to Southampton City Council to change the theatre to a bingo hall. In 1983 the Council refused the application. In the same year the Department of Environment awarded the building a Grade II listing. This strengthened the Council’s hand since it prevented changes being made to its theatre design and features. A Save The Gaumont petition contained 93,000 signatures. The Council offered to buy the building from Rank for £650,000. Hampshire County Council and the Arts Council of Great Britain contributed to the cost. An independent charitable trust was created in 1989 and given a lease on the building of over a hundred years for a peppercorn rent.

Dennis Hall took up the job of Director in November 1985 just as the Gaumont Theatre was closing. The last performance, Southern Theatre Productions’ amateur production of Carousel, took place in January 1986. The new name of the Mayflower referred to Southampton’s historic role as the starting point for the Pilgrim Fathers’ voyage to America in 1620. 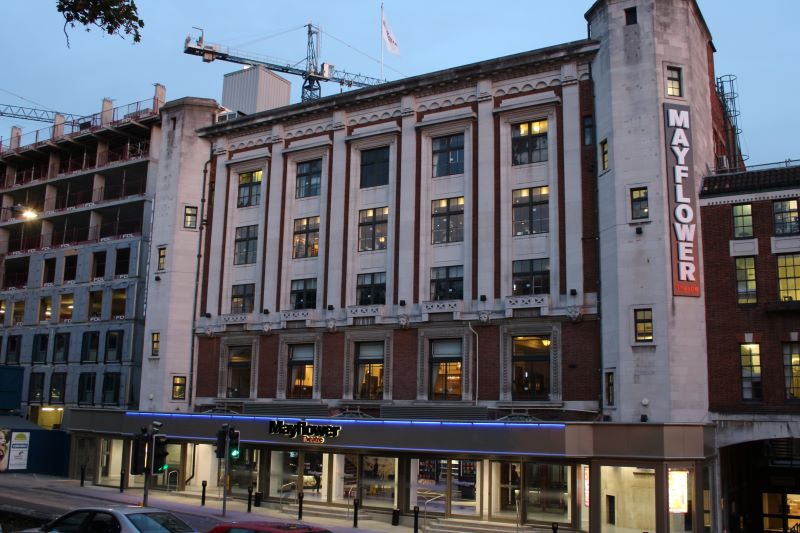 The Mayflower opened with a production of Peter Pan starring Bonnie Langford in February 1987. In May, an official Opening Gala starring Neil Sedaka was televised nationally. For Christmas 1987 Dennis Hall decided to stage a major pantomime, Babes in the Wood, with comic Les Dawson. It  attracted more than 65,000 people including me. I remember Les describing Southampton as “like Liverpool but with ‘O’ levels”. Russ Abbot’s Jack And The Beanstalk in 1989 achieved a then record attendance of 122,000 people. The highest ever attendance at a Mayflower pantomime was when 126,256 people saw Dick Whittington in 1994.

In 1990, the producers of the West End and Broadway hit musical 42nd Street decided to tour the full London production, doing away with the previous practice of touring a cut-down version and it was a success. With shows like Evita, the theatre was now making a surplus. In 1994 Andrew Lloyd Webber’s Cats attracted 125,000 and 111,000 saw Philip Schofield in Joseph And The Amazing Technicolor Dreamcoat in 1996. Les Misérables was seen by 125,000 people in 1998. In 2000 The Phantom Of The Opera set an all time record attendance of 185,000.

Still independent and run by a charitable trust, The Mayflower’s surpluses have always been ploughed back into The Mayflower. Mayflower Engage came into existence in 2013, and has expanded ensuring the theatre delivers its charitable aims and reconnects with local people.

In 2013 a new substantially larger foyer was added. 2014/15 saw the highest attendance ever with over 600,000 people seeing West End favourites War Horse, Disney’s The Lion King and Wicked. Since then the Mayflower has sold over 500,000 tickets each year. In 2018 a major refurbishment project was undertaken. All of the seats in the stalls and circle were replaced with 1,659 brand-new, wider seats. There were better facilities for people with disabilities. The refreshed Mayflower Theatre was opened on 26 September 2018 with a Gala Night of entertainment.

Then in 2020 the Covid 19 virus changed everything for the entertainment industry and shows were suspended. The theatre is now looking to its future. An open air show, Voices of the West End, is being held in partnership with the Mayflower at Broadlands on September 4-6. Until the end of the year, the theatre is also presenting a series of musicals and plays, filmed live on stage for the optimum viewing experience, on a big screen in its auditorium. These include 42nd Street, Kinky Boots, An American In Paris, The SpongeBob Musical, Hetty Feather and The King and I. Live shows are currently scheduled to resume from January 2021, with The Snowman. 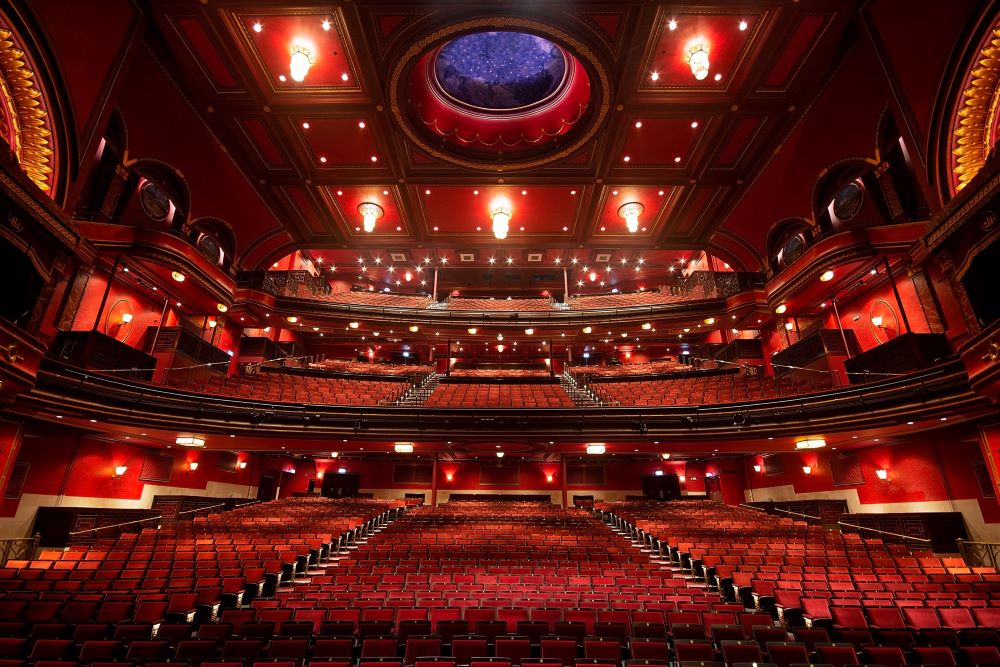