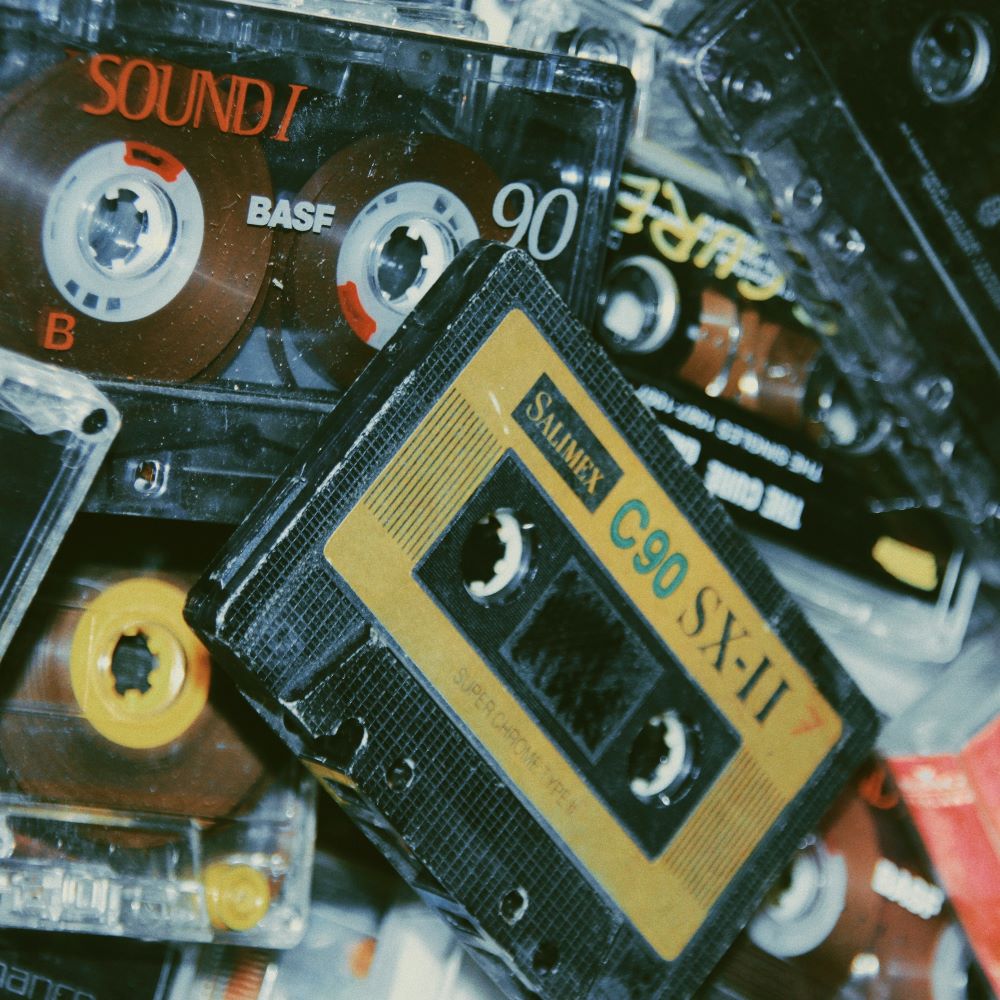 Southampton-based SIIYE started life in the 1980s as a magazine, rather like a catalogue, that described and gave details about cassette releases from all over. At that time, many bands were making and selling their own cassettes. it took an eclectic, open to all approach, including any tape that was sent in. It was started by Geoff Wall, with help from Phil Tyler and Roger Kennedy.

The website is a result of a joining of forces of the original Stick It In Your Ear magazine and ‘Caught in the Act’ online music mag .

Phil said “Our original catalogue of 43 cassette releases is now free and online, but there is much more local music on tapes from then including stuff we never got to release.  The 1980s was a great time for music in this area, so digitising it and putting it in an archive online has a value”.

The new catalogue has opened with 67 tracks from nine releases.

The strong interest SIIYE has received recently underlines the value in digitising music tapes for availability and preservation before they deteriorate terminally.  The original 43 title 1980’s SIIYE cassette only catalogue, is now available free online. It includes over 100 acts and involves nearly 400 performers.

We Have No Style

Stick It In Your Ear’s strapline “We Have No Style” relates to the very diverse music styles available on the label. The new releases include four very different gigging bands, three very varied jazz groups,  some experimental studio rock and a backing tape.

Phil continued: “digitising the original Stick It In Your Ear catalogue that was all released on cassette in the 1980s meant that we were limited to working on those releases specifically. With our new PBM catalogue of new listing, we are not restricted and can include anything that we feel is worth having. All the SIIYE tracks are free for anyone to stream or download. The artist always retains their copyright. musicians, creative work should never be owned by other people.

“Free open access means that we don’t have to worry about the possible level of public interest. Several people who have not kept tapes of their group, or lost them or their old cassettes won’t play any more, have been very excited and are delighted that their music is now available again. Often a forgotten times are brought to life for them, for good or bad. But for us, with or without demand,  the material is available for people to find maybe, and that ultimately is what matters most.”

Phil said: “These were frequently gigging bands but very different in style from each other. Two of them recorded these releases at the Victory pub with ARC Electronics on sound. All three bands played there regularly. The Victory was a pub opposite Central Station where Costa is now located. Jenny Nunn, the landlord, was a great music enthusiast. She was much loved, and the Victory contributed significantly to the music scene at the time. Sadly Jenny left very suddenly, and that was the end of music at the Victory. All three bands were on our SIIYE’s first release, PLUG01.

Phil talks through the archive:

“PBM 001  16 tracks. Exploding Seagulls, based around the brilliant and original songwriting of Nick Jacobs, were one of the bands on the famous (or should be,)  Southampton Compilation Vinyl LP “City Walls” conjured up by Richard Williams. It was during a conversation about ‘City Walls’ with Martin Brisland at a gig and with his offer of some Dub’allup tracks that Stick It In Your Ear decided to make a cassette compilation. Cassettes are freedom. So it was that with Dub’allup and five other groups SIIYE’s first cassette release PLUG 1″ Rolls on and Rocks Off” was consummated. Little did we realise that it was just a start. Soon bands were asking and offering us their tracks for a second tape. And so it was…

“PBM 002   Games To Avoid “Palindromes at The Victory” @ The Victory pub. Games To Avoid had a clear and uniting objective. They were determined to create a new type of music, not based on the blues. They were very organised and impressive live. They knew what they wanted as a group. The band famously lived at “Hollywood” a house on Bursledon Road where ‘Hollywood’ was tiled into the brickwork above the front door. A very creative place. The six tracks on PBM002 were a cassette EP sold by the band at gigs and dated Feb 1981.

“PBM 003   The Convertibles “Live at The Victory” @ The Victory pub, Southampton. These 19 tracks are a recording of a whole evening. Most bands played the entire evening in those days without or with only a short support slot. The Convertibles gigged a lot and were very impressive—great songwriters.  They were a driving guitar-based band with impressive searing/soaring solos as well as sensitive melodies and words. They were always well worth turning out to see. The landlord’s gift was a teeshirt in case anyone wonders.

“PBM 004   Paul Blatchford solo. “Hoglands Park CND Festival – backing tape”. Paul loves sound effects and recorded these songs so he could double and improvise over the top. He` doesn’t perform these days but was a strong and consistently creative performer.  Also known for being in the Bitter Lemmings and Lo-Fi Poets.  Paul wrote memorable and very wordy songs. You can listen to this brilliant wordsmith here. The tape never worked on the day as there was feedback and so it was just discarded. Recorded at SIIYE HQ Wyndham Court (Wynhamear Studios) 1982.

“PBM 006   The Poor Batchelor’s “Alan McGee”   @ Asylum Green Studio, Southampton – 1986 I don’t know much about these tracks, but Paul Blatchford and Paul Ramsay were in an experimental stage. Paul Ramsay was very into patterns that create music, and Paul Blatchford has a tremendous melodic root and a feel for sound textures. Well worth a listen if you have the time.

“PBM 007   Sunflower, PBM 008   Time Peace and PBM 009 Looselife were three Southampton based jazz groups. It just shows the depth and range of music at the time. Sunflower is still gigging regularly, COVID willing.

PBM 007   Sunflower “Another Ambition Outtakes Recorded at Avenue Studio – Feb & May 1982 Led by Sid Carter on Sax and Vocals. The music ranges from smooth jazz standards to rocky jazz numbers. Sid’s voice is in fine fettle and the lovely guitar by Bruce Roberts who shows what a great studio musician he was as well as being a genuinely great rock singer and guitarist. Nothing wrong with these tracks. I can only surmise that they recorded more tracks than they needed for the SIIYE PLUG 9 release Another Ambition.

There was a time when archiving would be done by libraries or public bodies but today, with many archives being gutted, sometimes down to one or two exploitable items, by local authorities and commercial interests, it is sad to say that archives are safest in the hands of private citizens so that entries not popular at the moment but of great value in their own right can be protected.”

Web Site www.siiye.co.uk or to go directly to the catalogue, click here