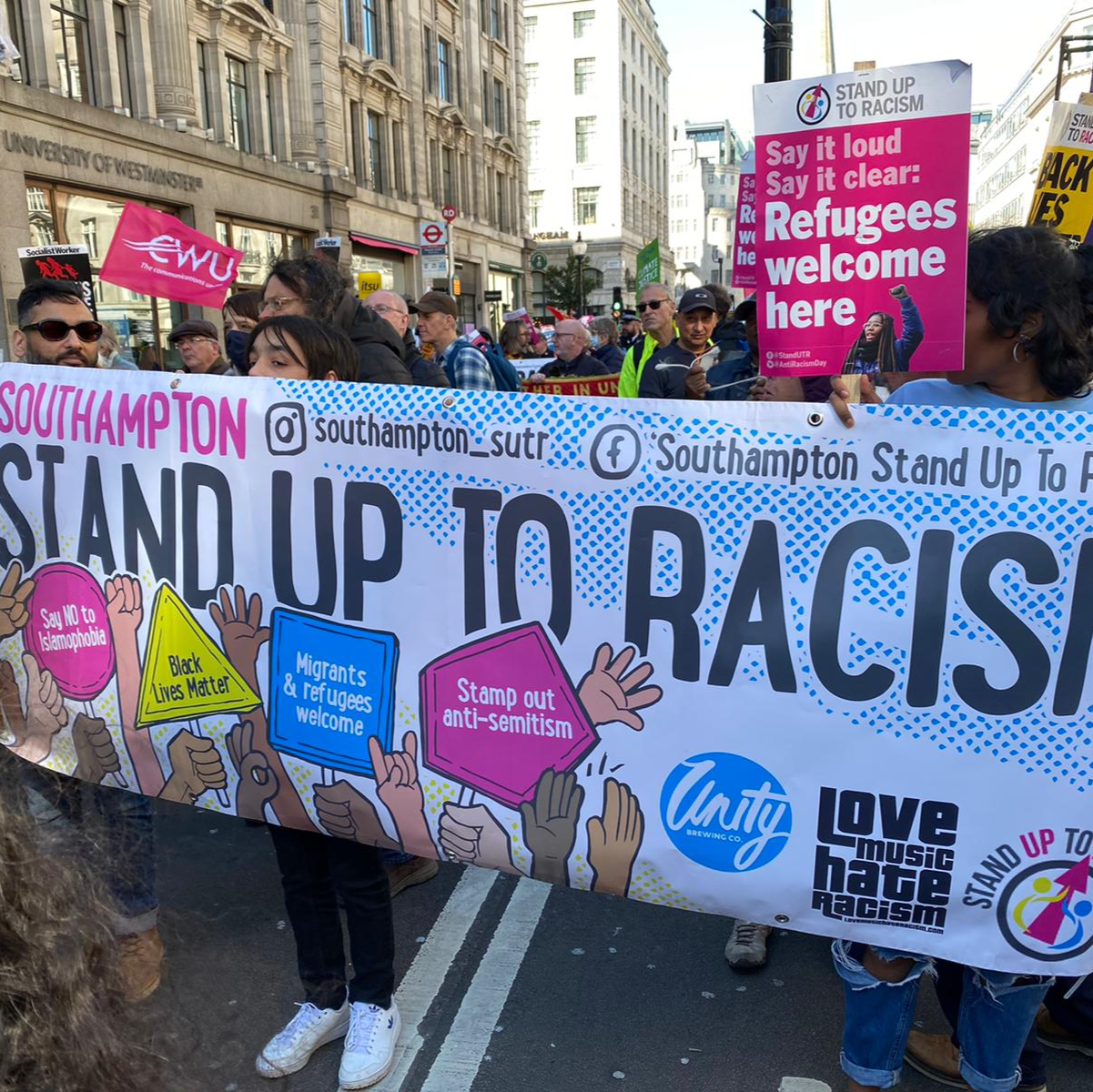 On Saturday (March 19) I attended a march against racism in central London to commemorate UN Anti-Racist Day, along with a coach full of campaigners from Southampton Stand Up to Racism (SUTR) and around 10,000 others from across the country.

The first anti-racism demonstration I attended was in 1994, when we marched to demonstrate against the British National Party’s bid to become elected in the Isle of Dogs constituency. Both experiences felt vital and necessary, a depressing indictment of how racism continues to cast a spectre upon our society despite the decades that have passed.

When I was growing up, being chased down the street by grown men and either threatened or attacked was an ever-present reality. It happened so often that I had come to accept it as an unalterable fact of life. While that overt physical threat has diminished over time, racism in this country has merely changed form; now it is codified in police brutality, legislation criminalising refugees, and government reports that obscure the truth from view.

The appalling treatment of Child Q by the Metropolitan Police, the Tories’ denial of institutional racism, the continuation of the Hostile Environment via the Nationality and Borders Bill and the different treatment of refugees from Ukraine when compared with those from Africa and the Middle East illustrate not only that we still have a very long way to go, but also why we must continue to build a united and powerful movement that is capable of fighting injustice and racism.

Usha Bholah, a spokesperson for Southampton SUTR said: “demonstrating about anti-racism is needed now because major media corporations use divide and rule tactics to allow for the scapegoating of black people, minorities, immigrants and refugees in political rhetoric and on media platforms, often owned by the 1%. The media influences public perceptions. To convince people to blame each other for our living standards rather than those really culpable is the best outcome for those who profit from our exploitation.”

We are led by Boris Johnson, despite his having described black people as “flag-waving picanninies with watermelon smiles” and Muslim women with Burkas as “letterboxes”. This is our Prime Minister, a man who also unashamedly likened the resistance of Ukrainians to Russian forces to the vote for Brexit. Under his watch, last year’s Sewell report denying the presence of institutional racism was released, despite widespread condemnation and refutation from experts and academics.

All of this represents fertile ground for the weeds of racism to flourish, and so public demonstrations of resistance and unity remain as essential as ever in the struggle to create a fair and just society. We at Southampton Stand Up to Racism will continue to march until that aspiration is realised.