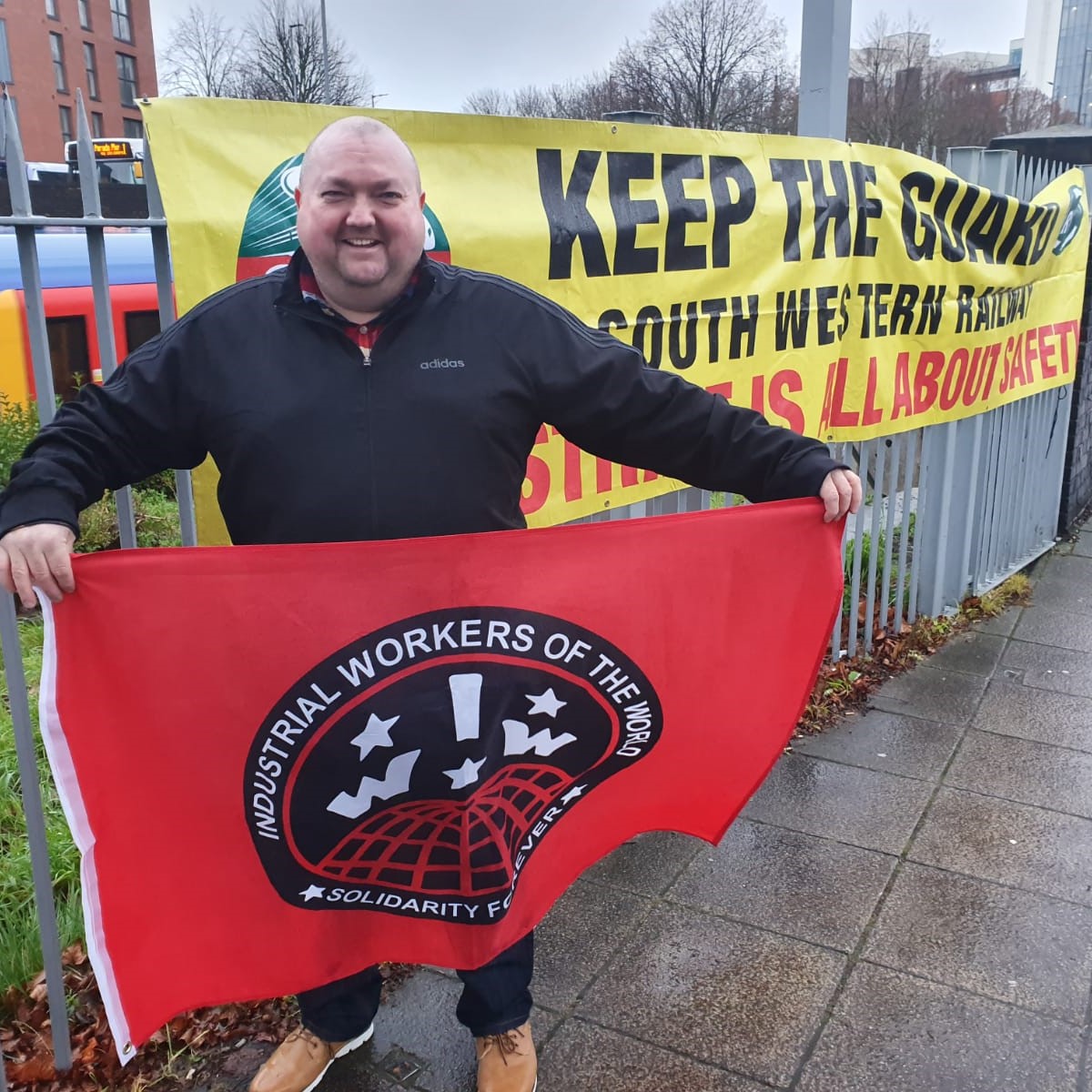 by Nathan Brown and Pete Hayward.

Activists from the Industrial Workers of the World union (IWW) are seeking to launch a Southampton branch.  Currently they come under the auspices of the Reading branch, but as local members have started meeting and organising, they are going to go through the process of being recognised as an official branch.

Affectionately known as “Wobblies”, the IWW was founded in 1905 in Chicago, a city with a history of workplace organising.  From the outset, the strategy was to create “One Big Union” to unite all working people, regardless of which industry or trade they worked in. The founding document remains very little changed over a century later.  The way that IWW members support each other regardless of employer or sector led to the adoption of the phrase “An injury to one is an injury to all”.

In the early 20th century the IWW was a force to be reckoned with in the USA, subject to significant persecution and violent repression as a result. Some will have heard of the Wobblies through songs by the likes of folk singers Pete Seeger and Woody Guthrie. Some of those songs were written by IWW member Joe Hill who was executed after what is believed to have been a wrongful conviction.  He is the source of the famous statement “Don’t Mourn,Organise!“.  The radical politics of the IWW saw around 175 members taking on the Ku Klux Klan in Greenville, Maine in 1924.

The first IWW group in Britain was founded by members of the Industrial Syndicalist Education League, led by Guy Bowman, in 1913. It was present, to varying extents, in many of the struggles of the early decades of the 20th century, including the UK General Strike of 1926 and the dockers’ strike of 1947. A member from Neath, who had been active in Mexico, trained volunteers who wished to join the International Brigade. They fought fascists in Franco’s Spain, but did not return.

However, the IWW is not a historical throwback to romanticise about.  It is a living union fighting for the rights of its members in the here and now. Between 2001 and 2003, UK membership increased, with the creation of the Hull General Membership Branch. During this time the Hull branch had 27 members of good standing, and was then the largest branch outside of the United States.

In 2006, the IWW was formally registered by the UK government as a recognised trade union. Membership has, since then, rapidly increased, and the IWW has engaged in campaigns with the National Blood Service, No Sweat, students at Glasgow University and riders for Deliveroo. In 2011, the IWW won back-pay and the right to collective negotiation for cleaners at the Guildhall, London, in a significant victory against the sub-contractor Ocean Contract Cleaning London Ltd. The Southampton branch hopes to build a network of local workers and activists in common cause.

What does the IWW do and how?

The IWW is different from many other unions in that it is global and represents people from across a wide range of sectors.  As the UK IWW website makes clear “We are people of diverse races, genders and ages, from every area and country. We have diverse backgrounds and a multitude of different skills, but we have the same goal —to win better conditions at work, and a fairer world tomorrow”.

As a grass-roots union, all reps are volunteers who have undergone training to negotiate on behalf of members, or support members to negotiate themselves. The IWW relies on class conscious volunteers to build a movement locally for the benefit of members.

The IWW provides resources for members on their workplace rights, to organise in their workplaces, and guidance on direct action.  In a diffuse global economy, in the time of Covid-19, and with a hard exit from the EU expected in 2021, it is crucial for workers to have access to information, and a network for security and safety at work.

The Southampton group is in the process of arranging training from the IWW so more of its members are able to organise effectively in the workplace, and represent other members.  By establishing a Southampton branch, the IWW can draw on the strength and skills of local organisers, activists and workers, and train new volunteers, some of whom may never have considered joining a union until now.

Some members will also be members of another trade union – known as “dual card” members.  These members are able to bridge the divisions created by other unions’ structures, enabling solidarity and strengthening one another’s resistance in workplace struggles.

The IWW understands that democracy within the economy, and within industry, strengthens political democracy.  The pandemic crisis has brought into sharp focus the reality that it is workers that keep the wheels of our economy turning, and that workers deserve fair representation, the resources to organise, better pay and higher living standards.  Workers produce and distribute the world’s goods and services, yet have little to no say in the workplace, and do not benefit from the wealth accrued by their employers.

Recent successes for people working in the gig economy have included the establishment of the IWW couriers network and campaigns to support Teachers of English as a Foreign Language (TEFL).  Couriers working for the likes of Deliveroo, Uber Eats and other firms have a very precarious existence.  They have no guarantee of work and despite the fact that they work for the courier firm are treated as self employed with no holiday, no sick pay and poor terms and conditions.  Helping couriers organise in other cities, the IWW has managed to arrange one day strikes or protests at courier firm offices to obtain a decent rate per delivery or improved health and safety.  Some couriers are looking at starting co-operatives to control their own working conditions directly.  The Southampton IWW group are keen to hear from couriers who want to start a local courier network.

The local Southampton group has put solidarity into practice by supporting strike action by other unions such as the RMT and University & College Union.  They have also had a presence at protests and activities organised by other local groups such as Extinction Rebellion, People’s Assembly and Solfed.

The IWW needs contributions from all backgrounds, and will support all of its members regarding their struggles.  The union prizes diversity as a means of moving all workers forward toward a world of justice and equality.  The IWW in Southampton is looking for men, women and non-binary workers, working class people from Black, Asian and European backgrounds, and from LGBTQIA+ communities, to add their unique voice to the cause.